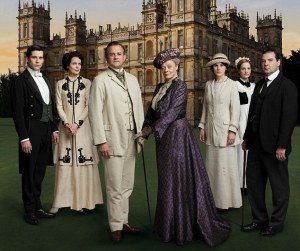 There’s been a lot of debate recently about anachronisms in Downton Abbey, and I’ve enjoyed reading it.  One or two were just glaring errors that made me laugh (double yellow lines and a TV aerial were a couple of them), and others I thought were just nit-picking.  ‘Get knotted’, for example.  I didn’t even know it was out of place.  I can imagine a first world war soldier saying it, and in any case there is some debate about whether it existed at the time or not.  There are other anachronisms that are a little more jarring, and a guy called Benn Zimmer from Language Log put together this great “Downton Abbey Anachronism Watch” video which picks up on a few of them.

But I didn’t mind the Downton Abbey anachronisms so much.  They didn’t stop my enjoyment of the series, and like pretty much everyone else in the country I watched all of it avidly.
But if you think the anachronisms in Downton Abbey are worth debating, you should try reading a few “Historical” Regency romances.  Thunder an’ turf!   I very rarely read them, to be honest, because they’re not my cup of tea (after Georgette Heyer, everyone else seems a pale imitation), but I was led to pick up a few recently by some recommendations I’d read on various blogs.  These were authors I’d never heard of before, because although they’re very popular in the States they aren’t well-known here.  And after reading them, I have to say I understand why.  Tare an’ hounds!  I did persevere with a few of these authors (honestly!) but by the time I came to Julia Quinn I was ready to ‘wish the whole lot of them at Jericho’.

So, bearing that in mind, here’s how I got on with The Duke and I, by Julia Quinn.

To someone like me, every sentence was torture.  By the time I’d read through all these, my blood was boiling:

These are just a few, a very few instances, since the whole book was riddled with them and as you can probably tell I was too tortured to finish it.

My absolute favourite, though, was the Duke who bought his son a gun for the fox hunt.  This more than anything brought the flavour of the American cavalry into the English countryside.  For anyone who doesn’t know about fox-hunting, it’s the hounds that kill the fox (that’s why fox-hunting has recently been banned in the UK as barbaric).  No-one carries a gun.  It’s probably more humane (I’m no expert), but the hunt would be over pretty quickly if the fox got shot.  Tally-ho, chaps, the fox is dead, let’s go home and open a can of Bud!

So, does it matter?  I feel churlish saying it does.  I’ve seen discussion groups on Goodreads in which readers have LOVED these books.  One particular comment I found touching was from a reader whose daughter has a stutter.  The hero of The Duke and I has a stutter, and grew up being bullied by his father because of it.  Obviously the book really struck a chord with this reader and she took some comfort from reading it, and this storyline was more important to her than the Disney style flavour of British history that I’m complaining about.

Still, in my opinion accuracy does matter.  I think authors have a duty to research and to try and present the most accurate picture they can, without losing the entertainment value.

How about you?  Do anachronisms bother you as much as they do me?  Do you think I’m being pedantic, and that the story and entertainment is the most important part of reading?  Let me know what you think – I’d love to hear from you!

4 thoughts on “Historical and Regency romances – does it matter if they’re “history-lite”?”