I’m delighted to welcome a fellow Yorkshire writer to my blog today – the second Yorkshire author in a month!   Maybe there is something in this northern English county of ours that’s inspiring people to write.  I’d like to think it’s the windswept moors, so beloved of the Bronte sisters, or the Yorkshire Dales, or possibly the fine walking in the Peak District.

On the other hand, it’s probably that our weather is usually so atrocious we are often stuck indoors, with nothing to else to do but plot out our novels.

Actually, to be absolutely honest, neither Mike nor I can claim to be from Yorkshire.  We are both from much hotter climes originally.  Mike Evers was born in Singapore, and I was born in Uganda, but our roads have converged around the globe to meet in this lovely county.

Whereabouts in Yorkshire do you live, Mike?   I live in Mirfield in West Yorkshire.  I moved here nine years ago after doing a teacher training course in Huddersfield. I originally hail from South Wales.

There are some beautiful parts to South Wales.  Where is your favourite place in the world?  I have very fond memories of travelling around the lakes and forests of eastern Poland.  I spent some time camping there with my wife before we were married.  It is still very much an unspoilt wilderness, with wild bison, boars and wolves shuffling in the undergrowth. Augustów is a lovely place, but I particularly loved a haven called Lake Wigry.  We were there nearly 10 years ago, and it was incredibly cheap as well as relaxing. The tour was the culmination of living for 3 years in Poland. Sigh.

I’ve only ever been to Krakov in Poland, but I LOVED it.  Would love to go back.

Being a writer is a great job.  What’s the worst job you’ve ever had?   I would say the week I spent carrying frozen slabs of bacon around in a meat factory near Bognor Regis. However, the week I spent packing polystyrene as it spewed endlessly from a row of malevolent, capricious and unreliable machines probably pips it. The job managed to be, at once, incredibly stressful, uncomfortably hot and utterly futile. On day five, the foreman noticed I was in tears and the agency didn’t ask me back the following week. Thank goodness.

Your jobs could top the poll of worst ever jobs cited on this blog – and that’s saying something!

On a cheerier note, what book do you wish you’d written?   Probably any book which is selling better than mine. Oh, that’s just about every other book!  More seriously, I’d have to say The Hobbit.  It really caught my imagination as a youngster and sets a standard in imaginative and charming story-telling.

What’s your happiest memory?   The day my son was born was the most stressful,  nerve-shredding  and bewildering day of my life. It was also the happiest.

If you could meet anyone in the world, dead or alive, who would it be and what would you say to them?   I would go on a Dublin pub crawl with Bram Stoker, Oscar Wilde and George Bernard Shaw. I’ve no idea what we’d talk about, but I’m sure it would be a hoot.

Oh, I’d love to come with you on that night.  A great craic it would be!

What would your superpower be, if you could choose one?   The mischievous school boy in me says the power of invisibility. The more pragmatic adult says the power to influence people.  I could use Jedi Mind Control to influence politicians and the like to bring about harmony. Actually, I’m not sure I could be trusted.

If you won twenty million in the lottery, what would you do with the money?   I’d get a nice house in the country, and put a sizeable chunk aside for my son’s future and unexpected expenses that life may throw at us.  I’d invest some of the remaining, and spend some time thinking about how best to employ a few millions charitably.

What’s the most important lesson life has taught you?   Treat other people as you would like to be treated yourself. 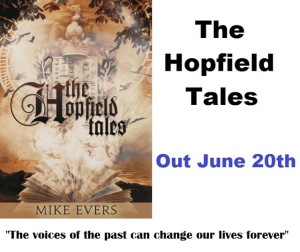 I recently finished the final story in a trilogy of stories called The Hopfield Tales.  The book is still in the preparation phase by my lovely publisher, GMTA Publishing , and is due out in the summer.  In the meantime, you can check out the first two books, which have already been published individually by GMTA:

Some secrets are meant to be shared; and a boy’s encounter with England’s most legendary archer will change his life forever.

In 1237, a man journeys to a priory in Yorkshire to seek refuge and treatment for battle wounds. He is betrayed and murdered. His final, dying act is to fire an arrow through a window, asking to be buried where it lands.

Nearly eight hundred years later, a schoolboy’s incredible discovery will lead to a friendship that will alter his life forever.   And he’ll hear some tales and secrets of England’s most legendary archer of all.

Campaign of the Gods

When Norse god Týr suspects his friend Thor is cheating in the phenomenal board game ‘Campaign of the Gods’ he takes matters into his own hands and searches out the only being in Asgard who can help solve his problem. But things are not what they seem… And once the forces of Hel are unleashed, only legendary Viking berserker Ivar Ragnarsson and his men can possibly save the day. They just have to work out when in history they are first – and why are the local townspeople so strange?

The blog is maintained by a fascinating fellow known as Rübezahl – who also happens to be in this wonderful book:  The Chaosifier

Thanks for allowing me to feature on your splendid website, Helena. Stay frosty.

Thanks so much for coming, Mike.  Have a safe trip back to Mirfield!

If you’ve enjoyed Mike’s interview, or if you have any questions or comments for him, please let us know.  You know we always love to hear from you!