A few days ago I posted the cover of my next novel, The Antique Love  (which will be released on 6th September 2013) here on my blog, and on my Facebook Page.

I was really happy with the response to my cover.  Everyone seems to love it as much as I do.  So I thought it might be interesting to reveal exactly what goes into producing the cover of a romance novel, and how the designer, Charlotte, and I arrived at a cover we were both happy with.

Of course the actual story is the main starting point for the design. Here’s the blurb, if you haven’t already seen it:

One rainy day in London, Wyoming man Kurt Bold walks into an antique shop off the King’s Road and straight into the dreams of its owner, Penny Rosas.  Penny takes this handsome stranger for a romantic cowboy straight from the pages of a book, and Kurt certainly looks every inch the hero…but he soon brings Penny’s dreams to earth with a thump.  His job is in the City, in the logical world of finance—and as far as Kurt is concerned, romance is just for dreamers.  Kurt is looking for a wife, right enough, but what he wants is a marriage based on logic and rational decisions.  Kurt treats Penny like he would his kid sister, but when he hires her to help refurbish his Victorian house near Richmond Park, it’s not long before he starts to realise it’s not just his home she’s breathing life into.  The logical heart he has guarded so carefully all these years is opening up to new emotions, in a most disturbing way…

I must admit, I was struggling for ideas with this one, but luckily, Charlotte has plenty!  I asked Charlotte if she could show a picture of my heroine, with an antique shop in the background.  It would have been an added bonus to have a love token (like the one in the photo above).  Charlotte tried her best to find a similar photo, but had no luck.  Thanks for trying, Charlotte!

It was a difficult brief, I thought, especially as Penny isn’t your typical gorgeous romance heroine.  When Kurt first sees Penny she appears ‘tired, overworked and in need of a vacation‘.  Not a very flattering description!  So Charlotte had the doubly difficult task of choosing a heroine who isn’t too classically beautiful, but still looks attractive.  Here is Charlotte’s first design: 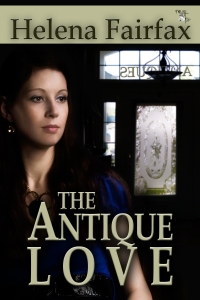 I liked the heroine, but I thought the rest of the image was a little dark.  Penny’breathes new life‘ into Kurt’s tired heart, and I wanted an image that would reflect her warm character.  Although Penny isn’t beautiful, she has great charm, and Kurt loves visiting her shop, because it is full of life.

Charlotte told me that if she “warmed up” the background, she wouldn’t be able to use the same heroine, as the outline is too dark.  So Charlotte went to great lengths to find a different heroine, and used a brighter background.  Here is the second image Charlotte sent me:

I liked the background much better on this image.  The wooden shelves look warm, and so does the lamp.

When Kurt first sees Penny, he is not immediately struck by her looks, and so I asked Charlotte to tone down the red lips and the brightness of the eyes.  Also, Charlotte left the font colour from the original image.  I do love this colour.  Grey has been fashionable for a while, and I really like it.  I did wonder if something warmer would be more appropriate, though – so difficult to decide!  And so I suggested trying Antique Gold for the font.

Charlotte always “gets” straightaway exactly what I mean.  This was the next, and final, image she sent, and the one I liked the most: 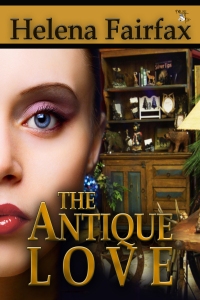 If you have any comments, please let me know.  It would be great to hear from you!

16 thoughts on “The Antique Love – story of a cover”