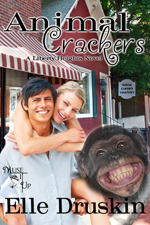 I’m lucky today to have persuaded the delightful Elle Druskin to leave her lovely part of the world and spend some time in the madhouse I call my home.  There are men drilling up the road outside (of course there are, this is Britain), my dog is going crazy, and I’m stuffing her with dog choc.

I’m feeling a little stressed, Elle.  Let’s put the kettle on and get ourselves a nice cup of tea and bisucits!

Where do you live, Elle?  I’m a New Jersey girl, born and bred in the Garden State and the setting of the Liberty Heights books. As a child I dreamed of traveling the world and I did it! I’ve been everywhere and also had the good fortune to live for a long time in Australia and Israel so I feel at home in both places. Currently, I live in Hawaii.  I know many people dream of visiting Hawaii and it really is a great place. Wonderful weather–I write this as much of the Mainland is sweltering in triple digit temperatures while we are relaxing on the beach with lovely trade winds,– truly nice people, magnificent beaches which are all public access and a fascinating culture.  At lunchtime I am often treated to impromptu ukulele concerts outside my window. What’s not to like?

That sounds marvellous!  How different from my own home today :(

Where is your favourite place in the world?  Do I have to pick one? Every place I have been has turned into a wonderful adventure, great and sometimes not so great experiences, and the chance to meet fantastic people. I suppose if I had to choose only one, it would be Scotland. My first trip to Scotland was a side trip while on business elsewhere in Europe. I went because I was so madly in love with Diana Gabaldon’s Outlander books. This was before organized Outlander tours and just as well because I’m not much good at organized sorts of travel. I never mind going places on my own. I adored the country, met a wonderful family with whom I remained in touch and visited on subsequent trips. I talked so much about magical Scotland that my children begged me to take them and they fell in love with the country and people too. Not only things like Edinburgh Castle and Greyfriars Bobby but also tiny villages and my friends’ farm way up in the Highlands. The history of Scotland is so rich and romantic, the scenery dramatic, the music and dancing incredible. Even being there in winter didn’t detract from our enjoyment. On the contrary, it was the first time my kids experienced snow which they thought was fabulous.

And I bet, like me, you’re looking forward to the TV adaptation of Outlander!

Being a writer is a great job.  What’s the worst job you’ve ever had?  Truthfully? None. I approach everything with best intentions and effort. When I was a teenager, I did have a job that was killer and I mean killer in terms of hard work. I had a summer job as a waitress at a resort in the Catskills. Think Dirty Dancing. The first time I saw that movie, I tracked down my first boyfriend who also worked at the same resort. We hadn’t spoken for years but that movie was a catalyst to do some detective work. We laughed remembering those years and talked about the movie and how we related to it. That being said, we worked really hard. In those days, you were expected to work three meals a day, seven days a week for a pittance.  If a guest wanted to order everything on the menu, and there were people who actually did that, you brought it with a smile on your face and a curse in your heart for all the running around involved. We made the big money on tips and we lived for that money but also had fun in between the hard work. I look back and wonder how we managed this with so little sleep.

What book do you wish you’d written?  Outlander. Diana Gabaldon has the rare gift of writing with elegance, authority and accuracy. She is a superb storyteller who has mastered the craft of writing. Her work enchants us and crosses genres of romance, mystery, history and science fiction. That’s about as good as it gets!

What’s your favourite song?  Again, hard to choose because I like so many genres of music. I could come up with different answer every day of the week.

If you could meet anyone in the world, dead or alive, who would it be and what would you say to them?

Well, this could change and undoubtedly would if you ask me in another week or month. Currently I’m reading Alison Weir’s The Princes in the Tower. I think almost everyone has heard something about this puzzling historical mystery. For those familiar or not so conversant with British history, particularly, fifteenth century history, the mystery around the disappearance of the very young princes, Edward V and his younger brother, has perplexed historians, writers and amateur sleuths for 500 years. The general consensus is their uncle, King Richard moved them into the Tower of London to usurp the throne and murdered them. I don’t suppose we are ever going to know the truth. It certainly was uppermost in my mind when I visited The Tower of London. Sooo, I guess I would like to confront Richard, see if he really was crookbacked which may have been something that is more myth than fact, not that it worried William Shakespeare. Then again, he was writing during the height of the Tudor reign and the Tudors were more than happy to vilify Richard. I’d love to confront Richard and ask him flat out, “Okay pal. Whodunit, how, and why?”

Yes, it’s still a great mystery.  Elle, you might like to take a look at a previous post of mine about Richard.  There are some more book recommendations – including a brilliant, exciting book that claims to solve the mystery!

What’s your happiest childhood memory?  This is really sweet. I must have been about four years old and honestly have no idea why, but I decided to plant lollipop sticks in my backyard. For some reason, I thought I could grow lollipops. Into the ground went the sticks which I faithfully watered. Surprise! The next morning, there were the lollipops. This went on for several weeks and I truly, completely, totally believed I had grown lollipops. My poor parents scurried outside in the dark to plant them. It’s a story we all still recall with much amusement and smiles on our faces.

If you had to marry a fictional character, from film, television, or books, who would it be?  Oh boy! I would say Gabriel Oak from Thomas Hardy’s Far From the Madding Crowd. I would guess many others would say Jane Austen’s Mr. Darcy, or Charlotte Bronte’s Heathcliff. I like Gabriel Oak because he really is unselfish and has a sense of morality. He’s gentle rather than a tough guy. Plus, I like the name Gabriel. That’s as good a reason as any other since it’s fantasy anyway.

What’s the most important lesson life has taught you?  If you’ve been given a task or chore that you really don’t want to do, get it done. Don’t procrastinate and wish it would go away. Tackle it. Don’t do a slipshod job or try to offload on someone else. Give it your best effort. You will be relieved and proud of yourself. It’s easy to do the things you want to do, much harder to do the tasks that you don’t want. 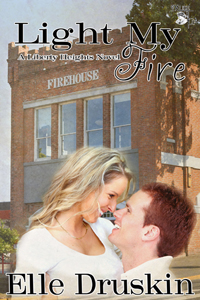 Light My Fire is my latest book and the fourth book in the Liberty Heights series. I love writing this series. It’s such a blast to spend time in Liberty Heights. The town has loads of characters and I liken them to those packages Arctic explorers left scattered around in case of emergency. Each of these characters has a story to tell so I just sit back and wait for them to tell me what’s going on.

In this story, widowed Kara Portman Wilson has a secret. For years, she’s been in love with mayor, medic and fire chief (it’s a small town!) Woodrow “Woody” Wilson, her dead husband’s best friend and cousin. Woody secretly feels the same way but neither realizes feelings are mutual. Matters are further complicated by the upcoming election. For the first time, Woody has competition from police chief Alice Finster who complains Woody gave a permit for a “sex” store to open in Liberty Heights. Yikes! Is Burning Desire a front for a bordello? How can Kara possibly make Woody see her as a woman rather than his dead friend’s widow? Can the Miracle Dress really perform a miracle? What does psychic Wayne predict? How did everyone get mixed up in the historic Revolutionary War Battle of Liberty Heights?

Without fail, the craziest things happen in this town. More than a few residents are, shall we say, a bit eccentric. Eccentricity extends to the animals including Antoine the Parrot who swears in French and the meerkat who substitutes for a groundhog on Groundhog Day. Then there’s Ricky The Picky Anteater who eats anything other than ants. He’s quite partial to designer shoes.

You have to love a town where a chimpanzee gives haircuts (Animal Crackers, Book 1). Okay, only one haircut and the results aren’t going to make it into Vogue.  Then there’s (Hanky Panky, Book 3) Grandma Baumgart who takes a joyride on a skateboard, hits her head and decides grandson Hank is married to Dana Fremder. They barely know each other and not exactly madly in love. Nothing shakes that notion out of Grandma’s head and nobody wants to upset the old lady so Hank and Dana are stuck pretending to be married. Things get a little out of hand when the entire town believes the story and Grandma is busy planning a reception so she can buy a new dress. You can guess the end but not all the things that happen along the way.

I hope it shows that I have fun writing this series. It’s gratifying that readers have also laughed, cried and smiled over the books. One reader wrote to me asking for driving instructions to the town. I got a huge kick out of that and was truly sorry to disappoint her that the town doesn’t exist. To me, that was an enormous compliment. For me, Liberty Heights is a real place even if it exists in my head. I see and hear all the people (and animals!) clearly and know my way around town. I’m grateful that my editors are also devoted to Liberty Heights. Just when we think nothing else can possibly happen, well, it somehow does.

All my books are available at Amazon, Barnes and Noble, Kobo and of course, MuseItUp.

See you in Liberty Heights!

Thanks so much for coming, Elle.  Your books sound really great fun, and your answers were just what I needed today.  Thanks for cheering me up!

If you have any questions or comments for Elle, please let us know.  We’d love to hear from you!