It would be brilliant if today’s guest could be with me in reality, and not just in the virtual world.  Author Eric Price recently told me if he ever came to England he’d love to go to a football match.  Well, the football season started four weeks ago, and already there is high football fever in the Fairfax household.

Although Eric can’t be here in real life, I have made him some traditional footie match half-time fare, and we are living the match experience at home by eating pie and peas washed down with warm lager, whilst standing outside in the freezing cold :)

Thanks for coming today, Eric!

Where do you live, Eric?   Northwest Iowa. I’ve lived here just over two years. I grew up about 40 miles east of St. Louis, Missouri in Illinois.  After I got married, we moved to a suburb north of St. Louis and stayed there for seven years. We moved here so I could work on my wife’s family’s farm, and so my wife’s father could start thinking about retiring. We live in the house where she grew up.

I’ve never been there, but I’ve always thought St Louis sounds such a romantic place.  Maybe you might think otherwise!

Where is your favourite place in the world?   I haven’t travelled the whole world, but of the places I’ve been, either Maine or Grand Cayman, depending on my mood—though I do like Iowa a lot. Maine has a mysterious, mystic aura about it, especially along the coast. I think a writer could get along there just fine (wink, wink). I spent a day in Grand Cayman about ten years ago, and I didn’t have nearly enough time to see everything I wanted to see. I may get a chance to go back next year.

Being a writer is a great job.  What’s the worst job you’ve ever had?   Every job I’ve had has contributed to building me into the person I am, so I hate to call one the worst. But I do have a terrible habit of overstaying my welcome in each of my previous jobs.  Once I’ve been at a job too long, I stop taking anything from it. If I’m not getting anything out of a job, I have a hard time giving any of myself to the job. It’s a lose/lose situation.

It’s a dreadful feeling when work has started to get boring.  Luckily, writing is never like that!

What book do you wish you’d written?  The Lord of the Rings. The book is so deep. I’ve read it several times, and there’s still so much about Middle Earth I don’t understand. I wouldn’t say it’s my favourite book, but I’d still like to write something with so much depth one day.

What’s your favourite song?  That’s a tough question, and possibly more mood dependant than the one about my favourite place in the world. I’m going to pick three. The Beatles’ While My Guitar Gently Weeps.  The Beatles plus Eric Clapton on guitar equals awesome. Pink Floyd’s Comfortably Numb.  The Wall, and this song in particular, turned me on to Pink Floyd. I now have almost all their albums, but The Wall is still my favourite. Billy Joel’s Scenes From an Italian Restaurant. This is just a fun song. It comes from my favourite Billy Joel album, The Stranger, and it makes me happy every time I hear it.

I also love Comfortably Numb.  The Scissor Sisters did a great cover.

If you could meet anyone in the world, dead or alive, who would it be and what would you say to them?   Jesus. I’d ask him if this whole Son of God, dying on the cross, forgiveness of sins thing is real. Either way it would solve a lot of the world’s problems. To quote Megadeth, “Brother will kill brother/Spilling blood across the land/Killing for religion/Something I don’t understand.//Fools like me, who cross the sea/And come to foreign lands/Ask the sheep, for their beliefs/Do you kill on God’s command?” It seems to me, in the history of the world, most wars have been fought in the Name of God, or because two cultures are fighting over what they believe to be their religion’s Holy Land. Passion is the opposite of logic.

What’s your happiest childhood memory?   Can I pick a time period? I don’t know if I have a single memory to rule them all, but the late summer of 1994 through the early summer of 1995 had a ton of cool events. I could write a book on it and it would be my “coming of age” story. The singularity that started everything happened when I went to the Billy Joel/Elton John concert. I had “cheap seats” (if such a thing existed). Some guy came and sat next to me. He said he worked for Elton John and he wanted to give me tickets to the front row. I had to ask him to repeat himself, as he had a heavy British accent, and I sometimes struggle with my native tongue—U.S. English. After questioning him to make sure he wasn’t some scam artist, I ended up seeing the show from the front row. I knew I’d enjoy Billy Joel and Elton John, what I didn’t know was Ray Cooper was touring with them as Elton John’s percussionist. He was amazing. That was probably the best of the best, but in the following months, I helped build my parent’s house, saw the only grand slam I’ve seen live, had an old man in a wheelchair try to buy pot from me (I didn’t have any, but I did give him some baseball tickets I wasn’t going to use), and I descended completely into my comic book addiction (you can read more about that problem here).

Good job this is a written interview.  I also have quite a heavy English accent :)

If you had to marry a fictional character, from film, television, or books, who would it be?  Another tough question, but I think I’d have to say Kaylee Fry from Firefly/Serenity. She’s eternally optimistic and easy to read. Plus she’s a genius mechanic, and there’s something attractive about a woman who knows her way around an engine…especially if it’s on a Firefly class transport. My second choice would be Gloria Cleary from Wedding Crashers. You know, the character played by Isla Fisher. Just sayin’.

What’s the most important lesson life has taught you?  Never give up on something you really want. This lesson pertains to all aspiring writers. No matter how good you think you are, you will get rejected. Learn to deal with it. Resubmit you story elsewhere. It may be necessary to revise and rewrite first. Don’t take the easy way out. If writing was meant to be easy, everyone would do it. 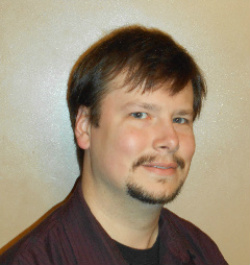 Unveiling the Wizards’ Shroud is a coming of age story about Owen, the only son of King Kendrick, and the likely heir to the throne of the Central Domain of Wittatun. He hates magic and blames it on the death of his mother, but when King Kendrick falls ill, Owen will have to join forces with the magician he holds responsible for his mother’s death to save his father. Together with Owen’s best friend, they will set out on a quest to find a powerful sorcerer who may be the only person with the knowledge to save the king. The story is filled with fantastic beasts from mythology and legend as well as a few monsters of my own creation. It’s a young adult novel with appeal for adult fantasy lovers as well.

Unveiling the Wizards’ Shroud is scheduled for a November release from Muse It Up Publishing, and you can stay informed of the progress by following my website/blog authorericprice.com and by following me on Twitter @AuthorEricPrice. When I get the cover image for the book, I plan on starting a Facebook fan page.

Thanks for interviewing me Helena. I had a lot of fun with some of these questions.

Thanks very much for coming, Eric, and I’m looking forward to the release of Unveiling the Wizards’ Shroud!

If you have any questions or comments for Eric, or even if you just want to know if St Louis is as romantic as it sounds, please let us know.  We’d love to hear from you!