Last year I was delighted to get to know author John B. Rosenman, retired English professor from Norfolk State University.

John previously designed and taught a course in how to write Science Fiction and Fantasy.  He is a former Chairman of the Board of the Horror Writers’ Association  and has published approximately 350 stories and over a dozen books, including several SF action-adventure novels.

So I was thrilled when John offered to come to my blog and share some of his experience and a few tips on writing.

Good to have you here again, John!

What’s the Figure in your Carpet?

by John B. Rosenman

C’mon, you know what I mean.  I’m not talking about whether you write science fiction or paranormal romances or historical thrillers or outright smut.  All this is related, of course, but I’m talking about something finer and more subtle.  Something you have to search for and peer at.  Something that’s staring you right in the face but is concealed by the fanciful design of your words or by paths you too often have travelled.

The Figure in the Carpet is a composite of many things.  Some can be as delicate and small as a tendency to overuse a certain word or phrase.  Plain speaking Ernest Hemingway believed you should do things “truly,” and William Faulkner loved solemn words like “avatar” and “repudiate.”  The Figure in the Carpet can also involve larger, more significant patterns such as your basic writing style and the lengths of your sentences.  Also, specific themes and images you use over and over again.  If you’re typical, you have many quirks.  Some of them are strengths, some of them weaknesses.  Whatever they are, they are precise fingerprints of your mind, which differ from all others.

What’s my point?  I suggest if you can detect the Figure in your psychic Carpet and recognize it for what it is, that you not only can (1) develop a better understanding of yourself as a writer and person, but (2) improve the quality of your writing and story-making.

Let’s use me as a guinea pig.

Recently, an editor for one of my novels pointed out I overuse “but,” “that,” “then,” and “and then” throughout.  Now, if I had used the “Find” feature on my PC, I could have spotlighted those habits and corrected them in advance.  However, to do that, I at least have to suspect the precise nature of the problems in advance.  But, uh, thanks to her, I’m now on guard, especially when it comes to beginning a sentence with “But.”

A minor problem?  No, the devil is often in the details.  While overusing a conjunction once may not be a cardinal offense, excessive repetition can become a serious irritant, undermining the effectiveness of your prose and damaging your prospects for a sale.

To mention one more example in this area, my editor also said I don’t use contractions enough, e.g., preferring ‘he had’ for ‘he’d.’  A picky point?  No, for too many ‘he hads’ can slow your style and make it seem stuffy.  Ultimately, these and other weaknesses are not just cosmetic considerations.  They weaken the way you think and express yourself and need to be recognized for what they are.

Okay, let’s consider a larger part of the Figure in my personal Carpet, a main part of the design rather than a minor thread.  In my novels, I like to focus on the Hero or Heroine as savior and as messiah.  In Beyond Those Distant Stars, only Stella McMasters, a cyborg, can save the human race from alien annihilation.  More recently, in Alien Dreams and Dax Rigby, War Correspondent, we also have saviors.  Both are painted in cosmic, spiritual colors and upon their shoulders the fate of billions depends.

Okay, nothing wrong with this.  Superheroes, as good old Joe Campbell would tell you, have a thousand faces, and many novels, movies, TV programs and the like depend on superheroes to save humanity in one way or another.  But these two particular heroes—

Eric Latimore in Alien Dreams and Dax Rigby in Dax Rigby—strenuously resist the notion they are special and that their destiny involves a divine or cosmic mission.

Now I was aware of this thematic pattern and that Latimore and Rigby closely resembled each other in some ways.  However, I viewed them as variations on each other, sufficiently different to warrant their mutual existence.  When I went over the galleys for Dax Rigby, though, I found a character tries to convince our hero of his great role with the same words used by an earlier character to Eric Latimore:

Whoa.  Too similar for comfort.  When I wrote Dax Rigby, I was not aware of this parallel, of the fact that I have a character repeat what a character in another universe previously said.

Is this a weakness or a justified variation on a theme?  Perhaps it’s the latter, but one thing’s for sure: I must not do it a third time.  My point, again, is that writers need to be aware of the infrastructure of their stories and novels, of the perils involved in repetition.  The Figure in our Carpet exists whether we see it or not, and perceiving it enables us to know more fully who and what we are as writers and to accentuate strengths and avoid weaknesses.

One last point: probably the major theme in my fiction is transformation in all its imaginable permutations.  A woman contracts a deadly, horribly disfiguring disease which makes all her friends shun her, and in the end she turns into—a radiantly beautiful, angelic creature.  In other stories, humans become aliens, or emerge like butterflies from a miraculous chrysalis.  Sometimes the transformation is psychological or spiritual and involves a sea change of attitude rather than form.

Obviously, this theme is a broad, worthy one, and I’m deeply fascinated by it.  But how much is too much?  No matter how resourceful and inventive I am, do I run the risk of being a one-trick pony and limiting my scope?  Either way, it’s something I must at least be aware of.

So, gentle reader, as I asked before, what is the Figure in your Carpet?  While it’s difficult to be objective and self-analytical, it’s still something we must do.

Here’s an assignment: Sit down and make a list of ten distinguishing traits of your writing.  They can be small, concerned with word choice and punctuation, or they can be large, such as repetitive themes and character types, or a tendency to telegraph your endings.  Or those traits can fall somewhere in the middle, like a tendency of your heroes to dream or share similar gestures, facial expressions, or mannerisms.  Whatever they might be, your task is to recognize them and determine if they are assets or liabilities.

If it helps, pick up one of your stories or novels and read it as if you were a customer in a bookstore, whether virtual or brick-and-mortar.  Put yourself in the Carpet objectively and try to see the Figure in the depths of your own mind. 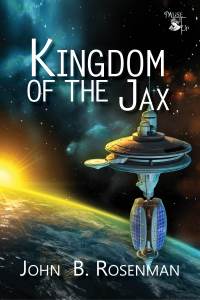 For four thousand years Turtan has traveled  to distant worlds in suspended animation seeking a weapon or device that can turn the tide against humanity’s alien enemy.

Blurb – Kingdom of the Jax:

Accompanied by Yaneta, his beautiful alien bride, Turtan travels across the stars to Cross Imperial Station.  The Jax, Overseers of the universe, have given him an amazing navigational device which can enable the Cross to quickly defeat their seemingly invincible enemy, the Cen, and end their five-thousand-year-old war.

But will the Emperor welcome him to the station or order the execution of both him and his wife?  Turtan is, after all, endlessly resourceful and may learn the emperors’ terrible secret and act of betrayal concealed these past five hundred years.  Even if he is spared, Yaneta is still a member of the enemy and may be killed instantly.

To succeed in his mission, Turtan faces an almost impossible task, one requiring not only luck but the full range of all the skills he has acquired in four thousand years as an elite agent.

It is his greatest challenge ever.

Thanks so much for coming today, John!

My romance novels tend to emphasise the hero and heroine’s eyes too much.  That’s one of the patterns in my carpet :)  My editor once told me, ‘I think the reader knows he has grey eyes by now’!

How about you?  If you’re a writer, how do you avoid unnecessary repetition?  And if you’re a reader, are there repetetive phrases you tend to notice in certain novels?  If you have any questions or comments at all, please let us know.  We’d love to hear from you!

15 thoughts on “Repeated patterns in your writing: sifting the good from the bad”