Some of you may remember children’s author Penny Estelle from when she visited last year.  It’s lovely to welcome Penny again today to discuss her children’s time-slip novels, and Penny has very generously offered to give away a copy of her novel to a lucky commenter.

Good to see you again, Penny!

Good morning Helena!  Thank you so much for letting me stop by, again, to visit with you and your readers.

First let me say, when I was in school (from elementary thru high school) history was not a favorite of mine.  We were practically enemies.  There are five stories in the Wickware Sagas.  The subjects are William Tell, Sybil Ludington, Molly Pitcher, Francis Scott Key, and the Orphan Trains.  I thought I could say with confidence that I knew everything about William Tell, Molly Pitcher and Francis Scott Key.  Not even close!  PLUS, I had never heard of Sybil Ludington and never knew Orphan Trains existed!

The research was fascinating to me and when you add to the mix, seventh graders from the twenty-first century, you have stories with humor, sarcasm, adventure and a bit of education!

Flash to the Past, Book 3 of the Wickware Sagas

Can snooty, seventh grader Kristy Sawyer’s day get any worse?  It’s a Monday at Langdon Middle School and first thing in the 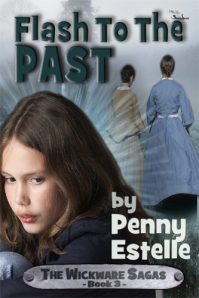 morning Kristy is sent to see Principal DeWitt. His long, drawn out lecture makes her late for Miss Wickware’s history class. But the worst is when she finds out she is being partnered with nerdy Larry Peables to do an oral report on some historical Molly Picture, or Pincher, or Pitcher.  And the report is due tomorrow!

Her plan to bat her eyes and flirt with the little nerd, sure that he will jump at the chance to do whatever she wants, blows up in her face when he flat refuses to do the research.  Her day takes a drastic turn for the worse when she and Larry find themselves in 1778, Trenton, New Jersey.  During their trip back in time, Kristy and Larry come face to face with the British, George Washington, become involved in the Battle of Manmouth, and of course, meet their oral report subject, the famous Molly Pitcher.

She has only Larry to help her figure out why they are there and how are they going to get home.

“What a jerk!” Kristy hollered, hoping Larry heard her.  “Like that little twerp could protect me!”  She looked around.  Not a sound could be heard.  No birds, no rustling of leaves, nothing.  She opened her mouth to call Larry back, but stopped herself.  “He’ll be back!”  Kristy was beginning to regret her outburst when Larry came around the bend in the road, running as fast as he could.

Her “I knew it” smirk faded when she saw the frantic look on his face.  He grabbed her arm and dragged her into the group of trees, tripping them both, rolling into the brush.

“What’s your…” Her words were smothered as Larry’s hand clamped over her mouth.  Kristy’s outrage lasted only seconds when a group of horses, ridden by men in red coats, galloped by.

When the dust cleared, they continued to sit in stunned silence.  A hard gnashing of teeth clamped down on Larry’s finger, snapping him painfully out of his trance.  “Ouch!” he yelped, pulling his finger from her teeth.

“Well, get your hand off my mouth!” she growled.  They got up and brushed leaves off their clothes, glaring at each other.  “Did you think, maybe for one second, those guys could have helped us figure out where the heck we are?”  Kristy asked, hands on hips.

Larry opened his mouth to answer, then shut it.  From far off a muffled thud could be heard.  “What is that sound?’ Kristy asked, annoyed because Larry wasn’t answering her.  “And did you see those funny looking cowboy hats those guys had on?  They were shaped in a triangle and had, like, three little sticky-up points on them.”  She stalked back up to the dirt road.  “And why is it so darned hot?” She yanked her skirt up to her knees.  “Would you please say something?  Anything!”

Larry joined her on the road.  He cleared his throat and said, “Those weren’t cowboy hats.  They are called Tricorn Hats.  I think the sound we keep hearing is cannon fire and we couldn’t ask those men for help, uhm, because they were British soldiers.”

Kristy looked at Larry as though he had grown another head.  “British soldiers?”

“You have been out in this blasted heat too long, Peables!”

“Kristy, think about it.  When the sun hit your mirror, neither of us could see for just a second.  Now here we are in different clothes and nobody is around.  That just doesn’t happen! When I turned the corner in the road, I saw puffs of smoke that only appeared when those booms were going off.  Then there are the horses, men in red coats and tricorn hats!”

“Big deal!  We…we could be in the middle of some movie.”

“Maybe, except for one thing!  I could see that smoke and the men on horseback riding this way, from really far away, and you are crystal clear.”

“I’m not wearing my glasses, Kristy, and without them I can’t see five feet in front of me.”

I hope you enjoyed the excerpt from Flash to the Past.  You can read more about these stories and other stories I have written on the following links.  Thanks so much for stopping by and I would love to offer a PDF copy to one commenter!

I loved the excerpt, Penny, and what a cliff-hanging ending!   I have to say I don’t know anything about Molly Pitcher and Francis Scott Key, either, so your Sagas will be an education to me, as well as a gripping read!

Do you know abut these periods in history?  Do you enjoy time slip novels?  If you have any questions or comments for Penny, please let us know.  Don’t forget one lucky commenter wins a PDF copy of Flash to the Past!