Skip to content
The #Twitterfiction Festival 2014 ran from 12th-16th March, and some wonderfully inventive stories came out of just using 140 character tweets. The romance category was represented by best-selling British novelist @KatieFforde, who live-tweeted from the perspective of a young woman on her twentieth blind date. @GraemeSimsion, author of The Rosie Project, tweeted the conversation between Gene (who’s been caught cheating his wife) and his friend Don, who’s giving him advice. Simsion’s followers were invited to join in the debate as the dialogue unfolded.
Another story I enjoyed was by @lizfremantle, author of Queen’s Gambit, who told the tale of the rise and fall of Ann Boleyn from the perspective of her dog (#TudorDog). I also really loved a non-fiction account by @adampopescu about his climb of Mount Everest, which included some stunning photos.
Here’s a selection of tweets from my two favourites of the Festival. First of all, @MeghnaPant retold the whole of The Mahabharata in an amazing 100 tweets. (The Mahabharata is an epic Sanskrit poem, the longest poem ever written, containing more than 1.8 million words.) 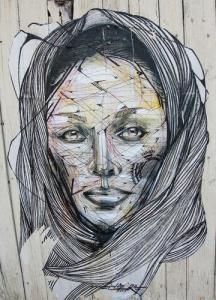 And this is how the story escalates.  (You’ll have to read the following tweets backwards, from the bottom of the page up.)
Cala ‏@ItsMeCala Mar 14 .@Always_Alia Dont. Please

Alia ‏@Always_Alia Mar 14  .@ItsMeCala I’m going to try to get to you
Cala ‏@ItsMeCala Mar 14  .@Always_Alia My dad’s coming for me
Alia ‏@Always_Alia Mar 14   .@ItsMeCala We need to get out of here
Omar ‏@OmarIsIn Mar 14  People being carried out of #TCMall main entrance. Some going toward ambulances, more being laid on the sidewalk.
Alia ‏@Always_Alia Mar 14  .@FedirIsHere No, but I’m scared. I need you
Fedir ‏@FedirIsHere Mar 14    .@Always_Alia You’re not injured though, right?
The tweets included photos and videos of the demo and what was going on inside the mall. Some of the other authors at the Festival merely told their story in several tweets, but I thought @laraprescott’s story really made excellent use of Twitter as the medium for the tale, in the way the Festival intended.
Twitter has changed the way people communicate and the way we follow news stories. When I first started my Twitter account (@helenafairfax) I thought it would be all about people tweeting what they had for lunch, but it’s so much more than that! I loved the idea of this festival. The amount of work that went into the author’s pieces, their originality and inventiveness, was really impressive and entertaining.
Do you have a Twitter account? If so, what do you tweet about? And who are your favourite people to follow? Do you think it’s possible to tell a great story in a series of tweets? If you have any comments at all, I’d love to hear from you!

6 thoughts on “Great stories from the #Twitterfiction festival 2014”