Over the past few weeks I’ve been interviewing some of the contenders for the Romantic Novelists’ Association Joan Hessayon Award for New Writers, and today Alison May is my last interviewee before the award is presented on Thursday at the RNA’s Summer Party. Can’t believe how the time has flown!

I ran my first new writers’ interview in March, and now today it’s a lovely summer’s day :) We’re sitting out in the garden listening to the buzzing of the bees, the chirruping of the birds and the humming of next door’s Flymo. Welcome to Yorkshire, Alison, and the sounds of an English summer! 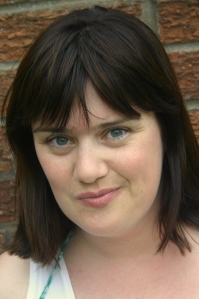 Whereabouts do you live, Alison? Worcester, which has been my adopted home since 1999. I grew up in Scarborough on the North Yorkshire coast. The only thing I don’t love about where I live now is the absence of seaside. I miss living by the sea.

I often used to go to Scarborough as a child and loved everything about it. The sea, the donkeys, the beach, the ice cream, the arcades – what a fab place for a day out.

Where is your favourite place in the world? Somewhere with sea! The romantic in me says Scarborough Castle headland, where you can stand on the cliff top with sea on three sides of you. However, the pragmatist in me points out that there are other sunnier bits of seaside available, so I think I’ll go for Maui, sitting on the beach during whale watching season waiting to see a humpback whale.

That’s really romantic! I’m with you on wishing to be beside the sea. Wish we could be there today!

Being a writer is a great job.  What’s the worst job you’ve ever had? Working in the café at a tourist aquarium. Horrible polyester uniform, complete with obligatory baseball cap. Tired grumpy customers who’d be queuing too long. And constantly being asked where the toilets were (Downstairs, next to the gift shop), and whether the dogfish was ok (Yes. He’s fine. He can lie on the bottom because he doesn’t have a gas-filled swim bladder.)

What book do you wish you’d written? The Da Vinci Code, Harry Potter, Fifty Shades of Grey? Any of those ‘sold enough to never have to work again’ ones would be fine.

What’s your favourite song? That’s too hard. It depends entirely on mood and circumstance. Do you want a song to dance to, or a song to create a mood? Me and my beloved EngineerBoy’s official song is ‘Pure’ by the Lightening Seeds, so that would have to make the shortlist. Also, most things by Tim Minchin, including the entire score of Matilda the Musical. To dance to though, maybe ‘Atomic’ by Blondie. As I say, it’s a hard question. Anymore like that and I’ll be demanding a stewards’ enquiry.

If you could meet anyone in the world, dead or alive, who would it be and what would you say to them? Such hard questions! *gives interviewer a bit of a look*

I’d love to meet Terry Pratchett, but if I did I’d probably just gush a bit about how incredible the Discworld novels are and then grin like a numpty at him, so probably it really is better never to meet your heroes.

What’s your happiest childhood memory? Happily, there are lots – recording the charts off Radio 1 and dancing to them in my sister’s bedroom. Sunday lunches at my grandparents’ house where, as it was Sunday, we would be allowed to use the front room. One memory that always makes me laugh, but I probably didn’t think was happy at the time, is the occasion when my sister and Grandma decided to cut my fringe. For reasons that I still don’t fully understand they decided to do this as a team effort and started cutting in towards the middle simultaneously from opposite sides of my forehead. You can imagine how that ended.

I remember the excitement of the Radio 1 top forty. Happy days! And I can well imagine the fringe fiasco :)

If you had to marry a fictional character, from film, television, or books, who would it be? The Doctor, just because he’s the Doctor and the Doctor’s incredible. Intelligent, hyperactive, adventurous, phenomenally well-travelled. What’s not to love?

What’s the most important lesson life has taught you? Have I mentioned that these questions are hard? I think I might actually have reached my current stage in life without accumulating any significant wisdom at all. So for what it’s worth, here are some random thoughts. Don’t give up on stuff, unless you don’t want to do them anymore. In which case don’t get hung up on the idea of not giving up. Don’t stress over things you can’t change, but be sceptical when people tell you that you can’t change things. When you want to shout at someone, have a biscuit first. If you’re still furious after the biscuit, do your worst, but generally be kind. Kind is way way better than important.

Great advice! I find biscuits have helped me make many major life decisions. 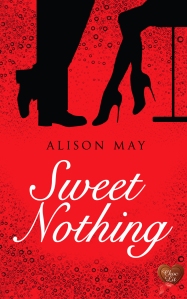 My debut novel, Sweet Nothing¸ is out now, available as a kindle ebook here

Would you risk everything for love?

Independent, straight-talking Trix Allen wouldn’t. She’s been in love once before and ended up with nothing. Now safely single, Trix is as far away from the saccharine-sweet world of hearts and flowers as it’s possible to be.

Ben Messina is the man who broke Trix’s heart. Now he’s successful the only thing rational Ben and free-spirited Trix see eye-to-eye on is the fact that falling in love isn’t part of the plan. But when Ben’s brother sets out to win the heart of Trix’s best friend, romance is very much in the air. Will Trix gamble everything on love and risk ending up with zero once again?

You can also buy my novella, Holly’s Christmas Kiss, here, and you can find out more about me on my website: www.alison-may.co.uk or by following me on twitter @MsAlisonMay

Thanks so much for coming, Alison, and I hope you’ve enjoyed your trip back to Yorkshire. I look forward to meeting you in real life on Thursday!

If you’ve enjoyed meeting Alison, and have any questions or comments at all, please let us know. We’d love to hear from you!

29 thoughts on “Good to meet you…author Alison May”