If you’ve read my About page you’ll know I was born in Uganda and came to live in England as a child. When me and my little brother got on the plane at Entebbe airport to come to England we were convinced we were going to New York. We were actually on our way to live in old York (without the “New”) in the north of England. It took us a while to get over the disappointment :)

So I’m excited to welcome my guests today, Ken and Anne Hicks, who moved to the real New York about the same time. Welcome to Yorkshire, Ken and Anne! 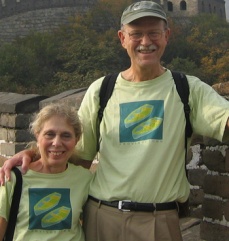 Where do you live, Ken and Anne?  We live in New York City and have lived here for over forty years now, since the summer before Ken started law school at Columbia University in 1973. At that point Anne was supporting him as an editor for a small publisher.

Wow. I bet you’ve seen a lot of changes in NY in that time!

Where is your favourite place in the world? We would not want to live anywhere else than right here in New York City where there are endless things to do and museums to visit and places to just walk around. Our books so far are all set in New York City. But, if New York were off the list, Ken could easily live in Florence. Anne would like to live in Amsterdam. We would probably meet each weekend in a convenient spot in between, say, Paris.

I heart NY, Florence, Amsterdam and Paris too!

Being a writer is a great job.  What’s the worst job you’ve ever had?  Ken’s worst job was as in a warehouse one summer just before he went to college, filling orders for women’s clothes that were manufactured in a facility next door. It was the most boring job he ever had although he did learn what an A-line skirt was.

Anne’s worst job was in an employment agency. That job was also extremely boring with the added bonus of having to call people who really didn’t want to talk to her, some of whom were trying to cheat the agency as well.

Those both sound pretty dull. Apart from the A-line skirts.

What book do you wish you’d written?  Anne would like to have written Sirens of Titan by Kurt Vonnegut. Aside from being light-hearted, fast-paced and amusingly plotted, it introduces the harmoniums who live off vibrations and expire in ecstasy when Beethoven’s Fifth Symphony is left on by accident.

Ken would have liked to have written The Sound and the Fury by William Faulkner. It is a book unlike any other that he has ever read.

Both Ken and Anne would also like to have written almost anything by Charles Dickens, but here the list broadens.

What great choices. Kurt Vonnegut’s Slaughterhouse 5 is one of my favourite books of all time. And all of Dickens. I haven’t read any William Faulkner (shame, shame!) but now he’s definitely on my list to be read!

Great choices again. I love Bob Dylan, too. Great idea to have someone else sing his songs, though :)

If you could meet anyone in the world, dead or alive, who would it be and what would you say to them? Ken would like to talk to his great-great grandfather Robert C. Hicks who was wounded in the Civil War and who was involved in Philadelphia politics in and around the time that the Republican Party was first formed and Lincoln was made its candidate. He would have a few questions about those circumstances and about the Battle of Ball’s Bluff (a Union disaster) where he was shot. If Robert C. Is busy, he would like to talk to Thomas Tindall a distant relative who came to this country from Yorkshire in or around 1690. He would ask about that journey and if he was related to the Tindall (spelled Tyndale) who was a translator of the Bible and was burned at the stake.

Anne would like to talk to Bill Clinton. She would ask him whether he thinks all the problems in the United States and the world will get resolved and how this will happen.

I wish all my guests could get to meet the people they want to talk to – and come back and say what they discussed. What a brilliant post that would be!

What’s your happiest childhood memory?  Anne remembers when she was three years old and would visit with her grandparents who lived near her family in the Washington Heights section of New York City. She would eat chicken for lunch and then take a nap under s their small, soft, pink blanket.

Ken had some cousins who lived on a farm in Bucks County, Pennsylvania with a huge barn that was great for all kinds of play. Every Memorial Day his family would go there for a big family reunion. The highlight of the day was a softball game pitting the kids against the parents. It was a great time.

If you had to marry a fictional character, from film, television, or books, who would it be?  In this fantasy, could Ken have multiple wives? He is hard-pressed to choose between Ingrid Bergman’s character in Casablanca, Grace Kelly’s character in Rear Window, or Lauren Bacall’s in To Have and Have Not. All are beautiful, smart, courageous and extremely loyal.

Anne would choose practically any character played by Ryan Gosling, including his characters in Crazy, Stupid Love, The Place Beyond the Pines, The Ides of March or Drive. He is handsome, smart, courageous, and extremely loyal.

Ken would say that the most important lesson is that happiness is more important that money.

Our latest book is called Things Are Not What They Seem and is a middle reader/tween novel in which one of the characters is a pigeon with a British accent. He was an English college student (named Arthur Whitehair) in the 1830’s when he misread a spell that was supposed to give him eternal life but instead turned him into a pigeon with eternal life. Jennifer and James (sister and brother) living in New York, help him undo the spell while also helping him elude Malman, who was turned into a hawk during the same incident involving Arthur and is out for revenge. It is published by MuseItUp Publishing and is available on the MuseItUp website and on Amazon.

Thanks for having us, Helena. We love reading your blog!

Thanks for coming all the way from New York City, Ken and Anne. It’s been great getting to know you both. I love the premise of your book – especially the idea of a pigeon with a British accent!

If you have any questions or comments at all for Ken and Anne, please let us know. We’d love to hear from you!