September 20th is the first anniversary of the release of Chris Weigand’s Palace of the Three Crosses. Chris has come to my blog today to celebrate – bringing one or two of her characters with her :)

Good to have you all here, Chris! 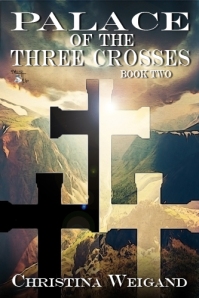 Palace of the Three Crosses blurb

Brandan and Joachim have returned from the brink of Hell, but everyone questions if they are truly healed and one with Asha.

As each prince tries to readjust to life, they must face the funeral of their father and their missing mother.

They each take on the responsibility of ruling a country with new wives by their sides, but can they and the countries survive the trials that will ensue because of their choices?

King Brandan and King Joachim requested an interview. I’m not sure this is a good idea, but when a king summons it behooves one to listen.

King Brandan: Welcome to the Dragon’s Lair at Palace of the Twelve Pillars. I hope your trip wasn’t too stressful.

King Joachim: Yes, welcome. I am so happy you could join us today. We know you have a lot going on in your life, so your visit is much appreciated.

King Brandan: Now that you are here we have a few matters to discuss with you. First: Magic. What’s with all the magic rules? There is so much that can be accomplished with just a little spell.

Chris: Yes, but more can be accomplished when humans, Kningrad and Mantion partner with Asha. Use of magic is tied to emotions and too often it is used selfishly for power and subjugation of others. Feelings of hatred, anger, envy and other negative emotions can be manipulated to do evil. The rules are there to prevent that.

King Brandan: Well I disagree with your decisions as well as the rules. Ramajadin would be better off without the limitations.

King Joachim: Better off for whom? You maybe! I’m not so sure about the rest of us.

Chris: Look at the chaos use of magic has wrought. Your Father is dead because of it, your mother is missing, your family and countries devastated by war and illness. Is that really best?

King Brandan: Father’s death was unfortunate, but considering the position he took, defying Waldrom, it became necessary. Mother made her choice and if she disappeared because of it, this is no concern of mine. The countries: if they submit to my rule there will be no problems. I will rebuild them.

King Joachim: What of Asha?

King Brandan: Asha is of no consequence. I can do without Him and His preposterous cabal.

Chris: Brandan, when did you become so jaded?

King Brandan: A better question: why didn’t you make Joa more like me? I love my brother, but his outdated, rose-colored glasses ideals are in the way of my plans.

King Joachim: Brandan that’s enough harassing the dear author she was kind enough to create us and let us live, even with the grief we gave her in the second book, refusing to follow the outline she plotted. We owe her our gratitude not our disdain.

King Brandan: Why did we ask her to come if not to answer our questions? I have more to ask and she will answer to me.

King Joachim: Brandan I think that is enough for now. Can’t you see you have upset her with all your disagreeable statements?

Chris: Thank you, Sire, for you defense. Although King Brandan’s questions do not bother me, I do have some other characters that need attending too as well as edits on the end of your story. So if you don’t mind I will take my leave now.

King Joachim: Yes that’s fine. I am so glad you could stop by today. Thank you.

King Brandan: This is not finished yet, but I understand your time constraints, besides I have some Mantions to torture. You will hear from me again. Thank you and goodbye.

Chris: Thank you Sires. It has been an honor and a privilege to visit and work with you. I look forward to our continued endeavors.

AUTHOR BIO: Christina Weigand’s a writer, wife, and mother of three grown children and a middle school daughter. She is also Nana to three granddaughters. She lives with her husband and youngest daughter in Pennsylvania, returning there after a short sabbatical in Washington. Currently, she’s working on fantasy novels and inspirational writing. Through her writing, she strives to share the Word of God and help people young and old to realize the love and mercy He has for everyone.

When she’s not writing, she’s active in her local Church as a lector, Bible Study, or with the church theater group, volunteering at her daughter’s school helping the children develop a love for reading and writing. Jesus fills her home with love as she shares Him through her writing.

Thanks for letting us share in your first anniversary celebrations, Chris. It’s been a pleasure getting to know your characters :)

If you have any questions for Chris, or any comments at all, please let us know. We’d love to hear from you!