It’s a great pleasure to welcome fantasy author James Crofoot back to my blog. James was last here with an interesting article on vampire myths, and how to tell if a vampire is really dead.

Today he’s back to answer some questions about himself, to talk about his phenomenal work rate and to tell us about the latest in his Necromancer fantasy series.

What inspired you to write your first book, James?  This actually started out as a short story and ended with the main charcter still a boy. I probably came up with this on one of my predawn walks. I like to write stories from different points of view, from people and creatures that most think of as maybe evil. Then I take this character and say hey, he’s a person too. He loves things and hates things. This character has feelings.

Is there a message in your novel that you want readers to grasp?  Yes, as a matter of fact there is. If there’s one thing I’d like readers to get out of this it’s that being different is no reason to be bullied. The message I think is subtle but it is there. People are all a little different but the way we deal with these differences can really affect a person. Sometimes good, but sometimes very bad.

How much of the book is realistic?  Even though fantasy, sword and sorcery stuff, I like to think my stories are believable to some extent. I like the characters to seem every day and somewhat normal.

So we see here you have another book coming out. When will it be available? Well it’s actually available now on pre-order from Kobo. I’ve provided the link here. But if you want to wait, it’ll be out on Amazon, Barnes and Noble smashswords and several other sites on the 3rd of Feb. 2015. Yeah that’s next month.

What are your goals for 2015? My big goal is to try and get out three books for next year. I’ve got this one and another submitted (Hoping to have that out by June) and I’m working on another as we speak. The one submitted is actually the start of a new series but I’m not ruling out another in the Necromancer series.

Tell us about your writing process a little for those curious about writing. Maybe we can relate. I like to write early in the morning. Sometimes I’m up as early as two, it has happened. First I get coffee, strong and black. Check email then into the writing. Sometimes I switch up and just do writing stuff but most mornings I write at least a little. That’s the start of my day most days.

Do you recall how your interest in writing originated?  I literally started writing before I learned what an alphabet was. I would write stuff, squiggly lines really, down on paper and read them back to my little sister. I did have a book put on the library shelves in elementary. The librarian gathered about five or six of us together in like fifth grade, had us write stories that she typed up, bound, and put on the shelves. Mine was about the civil war.

Do you have anything specific that you want to say to your readers? Don’t get me wrong, I like the money part. But above all else, please enjoy, that’s where I get my greatest pleasure. (Leaving a review wouldn’t hurt either if you like the book. Lol)

Visit my website for more. I’m getting ready to start blogging a book there. I’m pretty sure you’ll enjoy it. 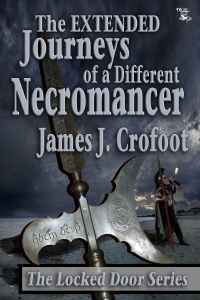 At Chris’ ‘urgings’ Thomas agrees reluctantly to attend the coronation of the Prince and Princess, Kaly and Aurora A coronation he helped bring about. His magic he sometimes wishes he never learned changes. What the necromancer doesn’t know is slavers are raiding the coast, putting his family in danger’s path. Again and again he is called upon to use the magic he will see die, but now…now he pulls together all he knows to save his beacon of sanity. No matter the cost.

The rest of the day Cerena spent bathing, oiling, bathing again, and then oiling again the mistress of the house. She used so much of the perfume that, mixed with the boiling water that was the bath, it permeated the entire chamber with the odor of sandalwood. The lulling scent, mixed with Marcus’s face in her mind, went a good way toward soothing the elf into a euphoria so deep that even the tainted magic that Chi’old’s voice usually stabbed into Cerena’s senses was eased.

The guests arrived early evening to sit on fine new cushions, drink too much wine, and eat too much food. They sat in the shade of the palm trees as the sun set and babbled endlessly of trivial matters of the rich. So much so that the elf thought she’d go crazy. The other house slaves ran here and there, serving the food on silver trays and pouring fragrant mulled wine into gold goblets. Cerena however, sat at the mistress’s feet waiting on only her commands.

“Get me some of the gingered ham on the table,” Chi’old finally did command.

Cerena rose and as she walked she heard the conversation turn to her.

“Aren’t you afraid to have her in your house?” asked the vorhies woman sitting on the silver cushions beside Chi’old. “I mean they’re beasts, aren’t they? Wild things from the north where they wear animal skins.”

“Yes, she is wild isn’t she?” answered the mistress. “You can tell just by the way she walks—long, confident strides, used to living in the open air and snow covered plains. And see how quick she is? Not the speed of subservience, but the agile moves of a huntress.”

“How are the other slaves acting toward her?” asked a human merchant in red silk sitting on the other side of Chi’old.

“Jealous, resentful,” answered Chi’old, and she took another sip of her wine. “I knew they would be. Add that with her being a blue-skinned elf. She has only one friend and that one is very sick.”

“What do you plan on doing with her?” asked the human in silk.

Cerena returned and bowed her head as she offered the spicy meat.

“Oh. I’m going to tame her.” Chi’old picked at the meat pieces on the tray. “I’m going to remove that spark of freedom from her.” Chi’old reached over the tray to lift the elf’s head by the chin. “See, in her eyes. Even in obedience there’s defiance.”

The merchant lifted his hand to his chest. “Oh my, you’re right. I’ll bet you a hundred silver draconia you can’t have that out of her in a month.”

The merchant’s face sank; obviously sorry he’d made the wager. Cerena guessed he would lose no matter what the outcome when betting with the vorhies.

“Besides,” continued Chi’old. I have leverage.”

“Oh yes,” intoned the vorhies woman beside the mistress. “You have her sick friend. It was the talk of the day how she spoke to you from the auction stage.”

“Oh, it’s more than that now. I have the sick woman’s son as well.” Chi’old’s smile sent chills into Cerena’s being. “He’s six and calls her auntie. I’m going to put him to work in the fields tomorrow. To be punished the same as the men if his work falls behind.”

Cerena’s eyes widened as they locked onto that smile. Her mind froze.

“Ah, see.” Chi’old casually sipped more of her wine. “She’s like a trapped animal now. Feral. Ready to strike to protect her young. You are mine to do with as I please, elf. Run. Where would you go? And on an island. With a sick friend and six-year-old boy child.” She tired of her game for the moment and told Cerena to return to her place.

Cerena choked down the urge to jump on the vorhies woman, wrap her fingers around that red neck, and squeeze until the burning sigil went out.

Thanks so much for your thoughtful answers, James. You certainly have a great work rate for writing. I only wish I could get up at 2am and begin work!

It’s made a lovely change for this romance author to host a fantasy writer. I loved your excerpt and the exotic sounding names. Good luck with your release and with all your writing plans!

If you’ve enjoyed James’s interview, or have any questions or comments at all, please let us know. We’d love to hear from you!

3 thoughts on “Fantasy author James Crofoot and his Necromancer series”