I’m thrilled to announce my new release, a romantic suspense novella called Palace of Deception, is now available for pre-order on Amazon. Hooray! Here’s the fabulous cover, which was designed by the lovely Charlotte Volnek: 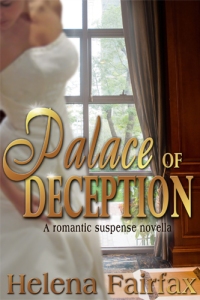 What do you think? As usual, Charlie was great to work with, and the cover is an excellent reflection of the story.

This is what the story is about: a young actress called Lizzie Smith is given the most dangerous role of her life when she’s asked to stand in for Princess Charlotte of Montverrier. The princess has vanished in mysterious circumstances shortly before her Investiture ceremony. Women are very much second-class subjects in the ancient principality of Montverrier. There are many men who would hate for a woman to become ruler…and they’ll stop at nothing to stop the Princess’s ceremony from going ahead.

With a sinister housekeeper shadowing Lizzie’s every move, her only confidant is her quiet bodyguard, Léon – but what secrets is he keeping from her? And what has become of the real Princess?

I loved the cover because it reflects an important part of the story. Lizzie’s bodyguard tells her repeatedly not to go too near the window in her suite of rooms. The cover shows Lizzie ignoring Léon’s orders. Here’s an extract from the book:

I knew in my heart I had done all I could, and that not even the Princess’s closest friends would guess at the deception. And yet despite this, I was filled with the most crippling fear, far worse than any stage-fright I’d ever yet experienced. I dropped my hand from the window, shivering with cold. What if something went wrong?

A step sounded behind me. ‘I warned you to stay away from the window, Your Highness.’

I leapt round with a guilty start. I’d been so enveloped in my fears, I’d failed to hear Léon enter. One look at his face showed me he just how upset he was at my disobeying his instructions. ‘But they’re so far away, Léon – ’

He reached across without speaking and drew the heavy curtains closed. His unusual brusqueness caused me a twinge of shame at causing him concern. I covered it by blurting out the first thing that came to mind. ‘Isn’t it strange, Léon? All those people will be sleeping soundly on the pavement tonight, and I’ll be up here in my soft bed, wide awake, worrying about everything that could go wrong.’

He switched on the lamp at the desk, then returned to tug at the drapes, making sure no chink of light could get through. ‘Uneasy lies the head that wears a crown,’ he quoted absently, his hands busy with his task.

‘Henry IV.’ I glanced across at him. After all these weeks thrown together, Léon was still full of surprises. ‘I had a role in that play once when I was at drama school. My first big production. The night before I didn’t sleep a wink.’ I went to the desk, and my eyes fell on the lines of the ceremony. I twisted my fingers together. ‘How I wish I were back in my flat in Edinburgh right now, and with all this over.’

Léon didn’t reply. Ever since I’d arrived in Montverrier, he’d been a constant presence. Silent, reliable, ever watchful, and rarely showing any emotion. Today would be our last evening together. I took in Léon’s dark features, the slight hook to his nose, the grace in his movements as he straightened himself, and knew just how much I would miss my faithful shadow.

‘How about you, Léon?’ I asked on impulse. ‘What will you do after the ceremony?’

He raised his head, regarding me for a moment or two before revealing, ‘I have a house on the west coast of Italy, between the sea and the mountains. I’ll ride down the coast road on my motorbike, the smell of the sea and the bougainvillea in my nostrils, looking forward to a meal of steak and red wine, and to a few weeks doing nothing but swim in the Mediterranean.’

I smiled, a broad, un-Princesslike grin that almost reached my ears, and banished the fear I’d been feeling. ‘That sounds perfect,’ I said. ‘I didn’t know you had such a poetic soul.’

‘A man would have a heart of stone not to feel the poetry in such a place.’ He hesitated a moment or two before adding softly, ‘But in fact, I have nothing against being here, in this present moment.’

I hope you like my cover and extract. I based the fictional principality of Montverrier on the very real county of Monaco. (Although of course, my characters are purely fiction!) Here’s a photo of the Palace at Monaco:

and the Palace guards parading: 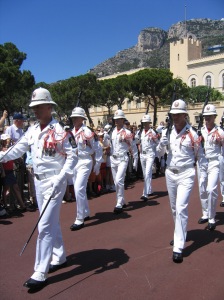 and the wonderful view over the harbour: 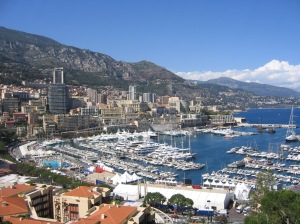 It’s a beautiful location for a romance, and the setting makes Palace of Deception perfect for a summer read.

You can pre-order my romantic suspense novella on Amazon US, Amazon UK, Amazon CA, Amazon IN and all sorts of other Amazons. For those that don’t have a Kindle e-reader, it will be available from other online retailers after ninety days. (I’m sorry I can’t make it available for all e-readers straightaway.)

If you have any comments at all, I’d love to hear from you!

14 thoughts on “Palace of Deception: a romantic suspense novella”