It’s time for another Round Robin, and this month, as it’s the month of Hallowe’en, our topic is all about the supernatural.

Here’s our first question: Do you believe in angels, spirits, ghosts, demons or other ethereal beings or locations?

I could write so much on this! I suppose the short answer is no, but there is so much in the world (and outside our world) that we don’t yet understand. I don’t believe in a spirit world, but perhaps one day – who knows? – I will find out I’m totally wrong about this, as about so many things!

I’ve certainly heard of lots of strange happenings that are hard to explain. I’ll give you an example – very near where I live lie the ruins of a magnificent

Victorian mansion called Milner Field. The house was commissioned by Sir Titus Salt, a great Victorian philanthropist and mill owner. His family lived in opulent style, and for many years life at Milner House was idyllic. The Salt family was at the forefront of society, mingling with aristocracy and even visited by the royal family.

But their good fortune didn’t last. There was a downturn in the woollen trade towards the end of the nineteenth century and the family lost money, but this was only the beginning of their troubles. A series of tragedies struck, lasting for decades. Titus Jnr was found unconscious in the billiard room of Milner Field in 1887 and was pronounced dead shortly afterwards. After that, James Roberts bought Milner Field from Titus Jnr’s widow, Catherine, but bad luck continued to dog the house. James Roberts’ eldest son died of pneumonia in 1898. His youngest son drowned while on holiday in Ireland in 1904. His second son Bertram died of a nervous illness in 1912. His remaining son was badly injured in the great war and was unable to work again, and his married daughter Alice was involved in a national scandal involving the death of an admirer.

The tragedies didn’t end with the Roberts family. Later owners of Milner Field also suffered misfortune. There were several unusual and unexpected deaths. The house gained a grim reputation locally, and eventually no one would buy it, and the once magnificent building was left empty. In the 1950s the house was completely razed to the ground, leaving only rubble and some traces of a wonderful mosaic floor from the conservatory.

The ruins are still there today, and the parkland is open to the public. Milner Field continues to have a reputation in my area for being haunted. And here’s the strange happening – one day at my writers’ group, one of my fellow writers said she’d been out jogging round Milner Field that morning, when she encountered a woman in Victorian dress, running straight towards her. Now, people in Victorian clothes aren’t unusual where we live – there are often guides dressed up to take tourists round the old mill. So, my friend thought nothing of it, but when she tried to avoid her,  the “Victorian” woman veered towards her, eventually brushing past her and running on. My friend turned round to say something to her – but the woman had totally disappeared! There was absolutely no one else there.

How do you explain that? Personally, I think there must be a rational explanation…but I have no idea what that is!

Our next question is: What do you think when the supernatural appears in stories?

My answer is: I love it! Here are some of the stories I’ve loved that involve either ghosts, magical realism, or the supernatural:

Oh Whistle and I’ll Come to You, My Lad, by MR James

The Signal-Man, by Charles Dickens

The Turn of the Screw, by Henry James

The Master and Margarita, by Mikhail Bulgakov

I could go on!

The final question: Have you used the supernatural in your own stories? 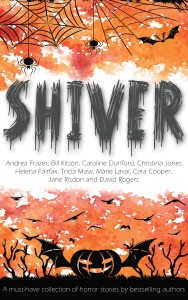 Yes. Last year I was involved in an anthology of supernatural stories called Shiver, which was published by Accent Press. My own story was a retelling of Rumpelstiltskin. It features a sinister European office cleaner with supernatural powers, a computer programmer who spends all night trying to create a million-pound Hallowe’en lottery scratch card game, and her handsome boss, who owns King Games.

There are several other supernatural stories in the collection – some light-hearted, some positively scary. You can download a copy from Amazon US, Amazon UK, etc, and all the other major ebook retailers.

What about you? Do you believe in the supernatural? Do you enjoy tales of the supernatural, and if so, which are your favourites? And what do you think is the explanation behind the strange sighting at Milner Field?

If you have any questions or comments at all, I’d love to hear from you!

And if you’d like to check out the other authors’ posts in the Round Robin, and get their take on this fascinating subject, you can find them here. Please do drop in and say hello!

23 thoughts on “Do you believe in the supernatural? Some unexplained happenings, plus my favourite supernatural stories”