On August 1st 2014 I published this post to mark hundred years since the start of World War One.

Today marks one hundred years since the Battle of the Somme, and in remembrance of all those who died I’m reposting it here.

Flowers from Hell: Letters from my Great-Uncle in WW1 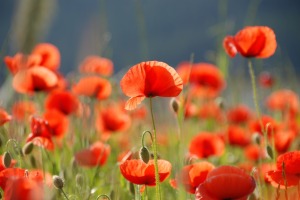 On one day alone of the Battle of the Somme, on July 1st 1916, Britain lost more than 19,000 men. A staggering twice that number again suffered injuries. This was one day alone. By the end of the war, the number of dead could be counted in millions.

Millions of people died. It’s almost impossible for us now to comprehend what this staggering statistic actually meant in real terms to the men, women and children who suffered their own individual tragedies because of it.

I wanted to dedicate this week’s blog to my great-uncle, Private Arthur Patrick Burke, who died aged 23 on October 9th, 1917.

My great-uncle was the youngest of five children. One of his sisters was my grandma, the sister he affectionately called ‘Tot’. Before the war uncle Arthur was a clerk, and he lived with his family in a pub in Salford, Manchester.

My family are very lucky in one way, because all my great-uncle’s letters from the front survived. After he died they were preserved by his mum (my great-grandma), and then by my grandma (Tot, the sister he addressed so affectionately in his letters) and then by one of Tot’s sons. The letters are now in the Imperial War Museum in Salford, Manchester, the city he grew up in.

My uncle Arthur’s letters tell a fascinating and moving story. Shortly after he signed up, he wrote home to say: ‘Dear Ma and all, Only a minute to spare, but my next shall be from somewhere in France, so for the last time for a short while here is a happy few farewell words for the dear home land. Am delighted that we are going out, and more so to think that I have so much to be thankful for, such strength & health that God has granted me to be able to partake in such an honourable war.

You shall be hearing of great things very soon now – in fact it is a case of just going over to put the lid on it.

Everything alive here – reveille is a t 2am tomorrow and according to how merry things are at present, I can see little bed tonight for any of us…

Cheer-oh, every cloud’s got a silver lining…‘

Like most people at the time, my uncle Arthur thought he was going to France for a ‘short while‘, and that the war would soon be over. His letters continued to sound cheerful for the next two years, but the horrors he must have seen, and at such a young age, are unimaginable. He mostly kept quiet about the realities of war when writing to his mum, but he did confide a little in his brother Reg:

‘Well, Reg, it’s just gone a bit quiet after an awful time, the expected happened, well we think it did, but owing to our strafing & theirs they didn’t reach us. Have got a chap in here now going mad with shell shock, the S.B. is with him, there’s about 4 touched out for this tonight…Goodness knows how we shall fare the rest of the night...’

And then later he says simply, ‘It’s a bugger – those are my sentiments at present.’

I find his most touching letters are about the time he was home on leave, and how he said goodbye to his family before getting on the train:

‘Well, old brother, as I’ve time to spare I might just turn my memory to those happy few days I had at home. Such a time I never had before in

all my life…Now for the departure from home, Ma was a brick. It was only motherly that at the last minute she should show stress of parting, but I understand her feelings…Then I left you both with such a handshake could anyone but realise the brotherly feeling which exists between us. I kept my eye on you as long as was possible, & then I had a good screw up at the old city, & here that impression is still with me – WHEN SHALL I SEE IT AGAIN.

In a few hours we were in London…A jolly day soon brought bed time – and then Victoria station. There was a little time to spare before the whistle blew for off, & as the time crept on, I noticed…Tot’s cheeks beginning to swell up, & it was hard work for her to keep the tap turned off. At last the signal was given, & away we went amidst cheers from the lads, & sad hearts from the platform. Tot at the very last minute had to show signs [of distress]…my expression now I bet she can recall…‘

That was the last time my uncle Arthur saw any of his family. I’m quite sure my grandma (his sister Tot) never did forget her brother’s expression as the train for France pulled out of Victoria station. The last letter her brother wrote to her says:

Just a little flower got under remarkable circumstances from Hell. Have sent one to Ma, a beautiful souvenir (to my mind) if you knew all – you would think so too...’

Somewhere in the hell of the front my uncle must have come across a few flowers growing. I find it incredibly moving to think of this young man recalling with affection his sister and mum at such a time, and picking and preserving the flowers to send to them.

The last letter in my great-grandma’s collection is the worst of all:

It is not a pleasing task to address you, for one is reminded of the total inadequacy of words to meet grief. But if a line of appreciation freely given and truly felt for your son can add anything to the alleviation of your sorrow then I am happy.

He was in my company and had been with me in action many times. I knew him well. His untiring efforts often contributed to my personal comfort – he was in charge of my mess.

In the line he showed that spirit – which made him popular amongst the men – of cheerfulness which is so helpful when things look black. He was a real worker and as brave as any man I had. He was always to be relied on for his thoroughness in all his duties so conscientious. His loss was a real one to me & the whole company regretted it. He died in the front line & is buried with his comrades.

You must grieve his loss but let the knowledge of his worthiness ease your heartache.

These are the letters and a glimpse into the life of just one of the millions of men who died in World War One. His death had a lasting effect on his family, and my grandma never forgot it. I remember as a child how distressed she would be if anything about the war came on television, and how she’d beg us just to turn it off. His body was not recovered but his name is inscribed on the memorial wall at the magnificent Tyne Cot cemetery in Belgium.

The total number of military and civilian deaths in World War One was over 37 million. Each person has an equally moving story to tell. Just to put the numbers in perspective, if I published one blog post every day to describe the life of every single person who died, it would take more than 100, 000 years.

My family was very moved to find out that the Imperial War Museum has teamed up with the BBC Philharmonic Orchestra to compose a piece based on my uncle’s letters. I like to think how funny he’d find this, how pleased and proud he’d be, and how his brothers and sisters would tease him about it unmercifully. The piece is part of the IWM’s ‘Reactions 14’ series of artistic responses to the outbreak of the war. It’s very touching that this ordinary soldier’s life, lost so young, should be remembered in this way.

Member of the Society for Editors and Proofreaders