It’s the middle of November already and that means it’s time for another Round Robin from my authors’ group.

This month the topic is: How does wording choice develop a character? How do you use and select your words?

Or, in the words of Dr Bob, one of the authors in our group:  “I sometimes find myself writing down turns of phrase like: She had to be the sexiest-looking 42-year-old on the planet, the best that money could buy. Is this a positive or a negative when you read a book? How can such statements be used to describe character?”

Dr Bob’s choice of words shows how one simple sentence can direct readers towards looking at things in a certain way. As a reader, when I read that description I feel it reveals far more about the protagonist who is ‘saying’ the words than it does about the 42-year-old he’s describing. (And already, for some reason, I feel strongly that it’s a ‘he’ who is talking.) I would think from this sentence that the protagonist isn’t the sort of person I’d want to know. He’s judging a woman on her physical appearance, and talking about ‘buying’ her on the strength of her appearance. Not a pleasant person. Of course, it could be a woman, and not a man, who is talking about another woman looking sexy, and talking about ‘buying’ her. Now that would be a twist that would surprise the reader!
I don’t think I’d talk about this sentence in terms of being ‘positive’ or ‘negative’ when I read it in a book. I don’t ever find anything negative about reading fiction…! They are just the words of an unsavoury character that the author is portraying. (And now I’d like to hear the 42-year-old speak for herself. What is she really like?)
For this post I decided to pick up three books from my shelves and open them at random for a character description. All of these authors use a totally different vocabulary to describe their characters. 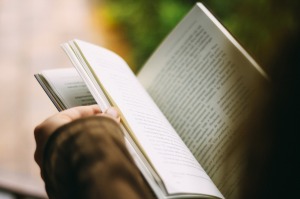 Book one: ‘But yet – he is not the kind of young man – there is something wanting – his figure is not striking; it has none of that grace which I should expect in the man who could seriously attract my sister. His eyes want all that spirit, that fire, which at once announce virtue and intelligence.’
Book two: Over the next few afternoons Mrs Phelps could hardly take her eyes from the small girl sitting for hour after hour in the big armchair at the far end of the room with the book on her lap. It was necessary to rest it on the lap because it was too heavy for her to hold up…And a strange sight it was, this tiny dark-haired person sitting there with her feet nowhere near touching the ground, total absorbed in the adventures of Pip and old Miss Havisham.
Book three: I sat down on the edge of a deep soft chair and looked at Mrs Regan. She was worth a stare. She was trouble. She was stretched out on a modernistic chaise-longue with her slippers off, so I stared at her legs in the sheerest silk stockings. They seemed to be arranged to stare at.
Book one is Jane Austen’s Sense and Sensibility. It’s Marianne Dashwood who is talking, and she’s talking about the things she thinks are missing from her sister Elinor’s suitor, Edward. She says he lacks ‘spirit’, ‘fire’ and ‘grace’. The words Jane Austen gives Marianne to say reveal far more about the character of Marianne – who is highly romantic – than they do about Edward. But that’s the genius of Jane Austen.
Book two is Matilda, by Roald Dahl. This is a book for children, so Roald Dahl doesn’t use overly flowery language. But he doesn’t talk down to his readers, either, just because they’re children. Matilda comes across as a sympathetic heroine through his choice of words – she’s tiny, yet determined to read the heavy book. Dahl makes his readers think that Charles Dickens’ books could be something they, too, could easily get absorbed in
Book three is the brilliant Raymond Chandler and The Big Sleep. I love the way he says Mrs Regan’s legs ‘seemed to be arranged to be stared at’. In that sentence he says so much – that Mrs Regan is calculating and is using her sexiness to throw him off the scent.

These are just three books out of many on my shelf, and three entirely different ways to put words together to build up a character description.
I’m in a writers’ group on Facebook and someone asked the question recently whether writers should read every genre possible, no matter what they write themselves, or if they should stick to reading their own genre. I think yes, they should read as widely as possible, because you can always learn something from how other writers choose and use their words.
This has been yet another thought-provoking topic. Thanks very much to Robin Courtright for setting the topic and for organising our Round Robin.
If you’d like to know what the other authors in the Round Robin are saying about character description, please do click on one of the links below and drop in to check them out.
***
Are you a writer, and if so, do you spend a long time over your choice of words, or does they flow naturally? And if you’re a reader, are there some writers whose descriptions and word choices you love?
If you have any comments at all, I’d love to hear from you!
A.J. Maguire  http://ajmaguire.wordpress.com/
Skye Taylor http://www.skye-writer.com/blogging_by_the_sea
Marci Baun  http://www.marcibaun.com/blog/
Margaret Fieland http://margaretfieland.wordpress.com
Victoria Chatham http://victoriachatham.blogspot.ca
Beverley Bateman http://beverleybateman.blogspot.ca/
Dr. Bob Rich  http://wp.me/p3Xihq-OB
Rachael Kosinski http://rachaelkosinski.weebly.com/
Judith Copek http://lynx-sis.blogspot.com/
Rhobin Courtright http://www.rhobinleecourtright.com