Elaine Everest is a friend and colleague from the Romantic Novelists’ Association. It’s a great pleasure to introduce Elaine’s latest release, The Butlins Girls.

The Butlins Girls is set in Butlins’ holiday camp in Skegness in the 1940s. (For anyone who doesn’t know Butlins, their seaside holiday camps are as much a British tradition as fish and chips and donkey rides on a rainy beach, and they’ve been providing family fun for decades. This postcard on Flickr  says it well!) 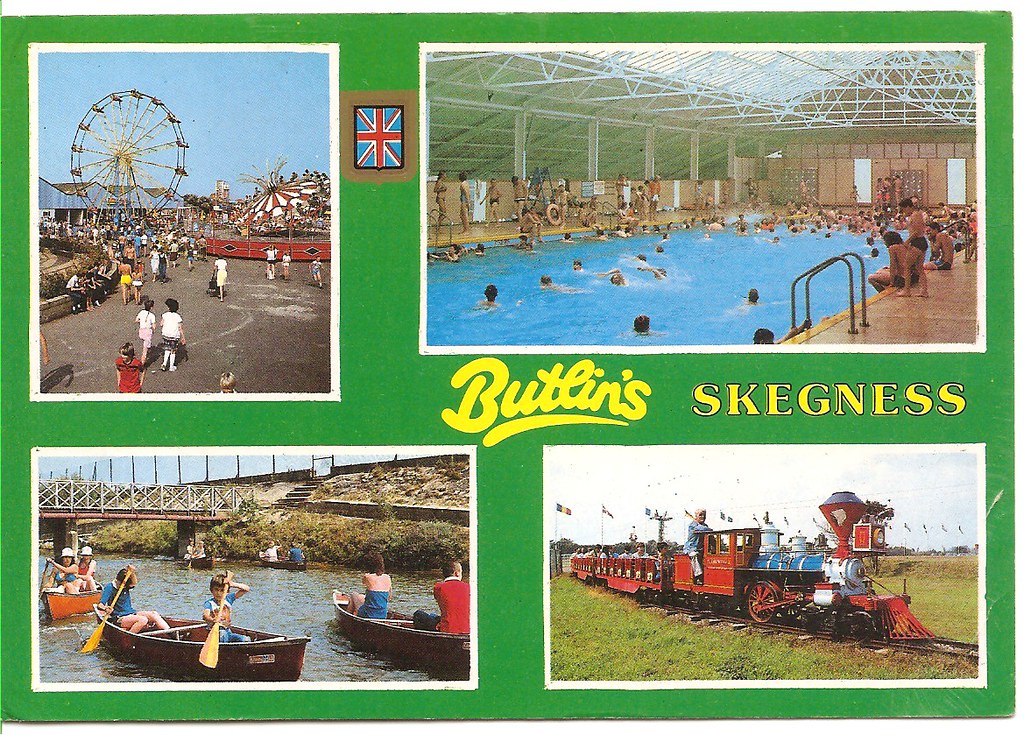 Elaine’s love of historical novels led to her writing her first fiction book, Gracie’s War, before being contracted by Pan Macmillan to write sagas. The first, The Woolworths Girls, was published in May 2016. The second, The Butlins Girls, is her heartwarming new release.

A former journalist, and author of non-fiction books for dog owners, Elaine has written over sixty short stories for the international women’s magazine market and can be heard on radio where she chats about canine issues – and just about anything else!

When not writing Elaine can be found teaching her talented students at The write Place Creative Writing School in Dartford, Kent where she holds classes at the Mick Jagger Centre – and no, she has not yet met Sir Mick!

A keen member of the Romantic Novelist Association Elaine sits on their committee and runs their Social Media.

Here is the blurb to The Butlins Girls:

Molly Missons hasn’t had the best of times recently. Having lost her parents, now some dubious long-lost family have darkened her door – attempting to steal her home and livelihood…

After a horrendous ordeal, Molly applies for a job as a Butlin’s Aunty. When she receives news that she has got the job, she immediately leaves her small home town – in search of a new life in Skegness.

Molly finds true friendship in Freda, Bunty and Plum. But the biggest shock is discovering that star of the silver screen, Johnny Johnson, is working at Butlin’s as head of the entertainment team. Johnny takes an instant liking to Molly and she begins to shed the shackles of her recent traumas. Will Johnny be just the distraction Molly needs – or is he too good be to be true?

Opening excerpt of The Butlins Girls

Molly Missons gazed around in awe. So this was Butlin’s. Whitewashed buildings, bordered by rhododendrons, gave a cheerful feeling to a world still recovering from six years of war. The Skegness holiday camp covered a vast area, much larger

than Molly had expected.

If it were not for a helpful bus conductor, she’d have alighted far too early, when first spotting row upon row of flags fluttering in the early May sunshine. As it was, the bus followed the boundaries of the camp and pulled up at the visitor entrance. The conductor helped her from the vehicle, passing her suitcase down from the steep step. With a cheery call of ‘Hi-de-hi!’, he waved goodbye.

Up ahead, she could see a long white building with the words ‘Our true intent is all for your delight’ emblazoned on the front wall for everyone to view. She thought it was a genuine welcome. Neat borders of shrubs and what looked like a children’s play area were extremely inviting to this first-time visitor. What was missing were people. She couldn’t see a single one. Molly knew the start of the holiday season was still days away, but surely there should be staff around the place? She pulled a letter from her coat pocket and checked the words. Yes, she had arrived on the right day, albeit several hours early. Such were the trains from Kent that if she’d caught the only other train from her connection in London to Lincolnshire, Molly would have arrived two hours late for her new job and not made a good impression.

But where was she to go? Molly chewed her lip and looked around in bewilderment, hoping someone would come to her rescue.

‘You look lost, m’dear,’ a gruff voice called out from behind her.

She jumped, not expecting her wishes to be answered so soon. Spinning round, Molly spotted an elderly man peering through a hatch in the window of a military-style gatehouse at the side of the road.

‘Yes, I am a little,’ she called back. ‘I know I’m in the right place, but I have no idea where to go or what to do next.’ Molly felt her chin wobble slightly. It had been a long journey into the unknown. If only she was at home once more, chatting with her mum in the kitchen while they prepared the evening meal. Sadly, that was never going to happen, however much she wished. It was a foolhardy idea to come to Butlin’s. It had been her best friend, Freda, who’d suggested applying for a job at the newly opened holiday camp. Despite fighting it back, a tear splashed onto her cheek.

‘There, there, missy – there’s no need for tears. Just you get yourself in here and I’ll sort things out for you or my name’s not Spud Jenkins. You can leave your suitcase out there. It won’t come to any trouble.’

Molly sat on the wooden chair Spud nudged towards her. ‘I’m so sorry. It’s been a long journey. I’m just tired. Once I know where I have to report, I’m sure I’ll feel better.’

Spud watched her thoughtfully as he struck a match over a single gas ring, which came to life with a loud pop. Shaking a battered kettle to check it contained enough water, he placed it onto the now flickering flame. ‘I take it this is your first visit to Butlin’s?’

Molly nodded as she took a handkerchief from her handbag and wiped her eyes. ‘Yes, it is. You must think I’m so silly.’

‘Not for one minute. You’d be surprised how many times I’ve been a shoulder to cry on. Boyfriend troubles, homesickness . . . I’ve heard it all in here.’

Molly looked around Spud’s domain. With windows on three sides, there wasn’t much in the way of privacy, but then she supposed he needed to see who was coming and going from the camp. ‘Do you work in here all the time?’

‘Ever since the governor started building the camp back in 1935.’ He glanced proudly at a framed photograph on his desk. ‘The Royal Navy even let me stay on for the duration to do odd jobs and the like. I was no good to man nor beast with this leg.’ He tapped his left leg. ‘Shrapnel from the First War,’ he announced proudly. ‘The governor put in a good word for me.’

‘The governor?’ Molly queried, peering more closely at the two figures in the photograph. ‘Is that Billy Butlin?’ She recalled seeing his face on posters when she had her interview.

‘The one and only. He’s a good sort is the governor. He takes care of his employees as well as the campers.’

Molly could see that the elderly man was proud of his boss. ‘Will he visit the camp this summer, do you think?’

Spud took two chipped cups from hooks on the wall, close to where the kettle was starting to boil, and measured Camp coffee into each, followed by a generous spoonful of sugar. ‘I don’t see why not. He always used to pop in to see how things were going and to meet the punters. That was before we closed for the duration. He likes to meet the new staff as well. A popular man, but he doesn’t suffer fools gladly. I suppose you’d say he’s charismatic. Yes, that’s the word, charismatic.’

‘I don’t know much about Mr Butlin. I’ve been concentrating more on the job I have to do – and working out how to get here.’ She fell silent as she thought of her home and the friends she’d left behind.

Spud could see the young woman was close to tears again. ‘Now, you tell me what job you’ve been signed up for. You’ve got the looks of a dancer. Am I right? Or perhaps you’re the new Punch and Judy man?’

Molly giggled. ‘I’m not much of a dancer, but Punch and Judy sounds fun.’

Spud grinned back. She was a pretty little thing when she wasn’t looking so sad. He’d always had a soft spot for green-eyed girls with chestnut curls. ‘That’s the way to do it!’ he said in a squeaky voice, and they both burst out laughing.

‘I’m not really skilled at anything much, but I did use to help my mum with the Brownies and Girl Guides until I joined the Women’s Land Army. I helped her after returning home as well. When I had my interview with Butlin’s, they thought I’d be able to assist with the children.’

‘So you’re Miss Molly Missons who is going to be a Butlin’s auntie?’

‘How did you know that?’ Molly gasped, but then saw Spud was looking towards a list on a clipboard hanging near the door.

Spud tapped the side of his nose and winked. ‘Not much gets past me,’ he said. ‘I reckon you’ll be run off your feet once all those nippers arrive with their parents. They’ll keep you busy.’

‘I’m sure I will, but I’m not convinced I’m right for the job. I’ve had no formal training or anything.’

Spud pointed to the photograph. ‘Do you think the governor did when he opened this camp in 1936? Why, he was a showman. He’d never owned a big holiday camp like this. This was the first. He had an idea and went along with it. He learned what was wanted and came up with the goods.’

She nodded. ‘Oh yes. I always visited the travelling fair when it came to Erith Recreation Ground, near my home. It was magical.’

Spud smiled as her face lit up. ‘There you go, then. Chances are the governor knew them. He knows all the showmen. It’s a close community. He had hoopla stalls before he ran his own fairgrounds. He even brought the first dodgems into the country.’

Molly did like the elderly man with the big smile. Knowing Spud would be on duty by the main entrance to the camp meant she could pop in and speak to him from time to time. He seemed to sense she was afraid and alone.

‘Now, you drink your coffee and I’ll walk you up to the staff office. They’ll soon take care of you. By tomorrow you’ll have made some friends and it’ll feel as though Butlin’s has been your home forever.’

Molly sipped the hot coffee generously enriched with evaporated milk, which Spud had poured from a tin can. She wasn’t so sure she’d make friends as quickly as the man seemed to think, but she’d do her best. She wouldn’t be her father’s daughter if she didn’t at least try. For now, she couldn’t go home. It wasn’t safe to do so. Instead, she’d have to make the best of things. At least it would be fun. There were worse places to run away from home to.

Thanks so much for dropping in to share the news of your new novel, Elaine. I’m reading The Butlins Girls at the moment, and I’m loving it! Congratulations on your release!

If you’ve enjoyed hearing about Elaine’s Butlins saga, or have any questions or comments at all, please get in touch. We’d love to hear from you!