The season of witches, spells, superstition and Hallowe’en is approaching, and it’s a time of year I love. The Yorkshire moors near where I live are shrouded in mist some mornings, and it’s an eerie sight, as you can see from my photo. This was taken on a day when I was standing above the valley, in bright light, with the mist below me, frothing away like a witch’s cauldron.

In my romantic suspense, A Year of Light and Shadows, one of the themes is the superstition surrounding Macbeth. My heroine, Lizzie, is an actress, and Macbeth is the play she’s rehearsing.

Right from the start, Lizzie feels the play is bringing bad luck. She tells the hero, Léon:

‘It’s well known the play is cursed. For us actors, it’s a nightmare. We have to remember not to say the name “Macbeth” in rehearsals, because if we do, something terrible is bound to happen. We have to call it “the Scottish play”, instead. And if any of the actors forget, they have to go outside the rehearsal room, turn round three times, and knock on the door to be let back in.’

Later in the story, one of the actors does say the name “Macbeth” backstage by mistake – and bad luck surely follows…

This engraving of a witch is by Albrecht Dürer. What a chilling picture! I found the image in the New Zealand Te Papa Museum’s online collection. Many of their images are available to download, and they have a stunning collection.

Some actors believe the spells in Macbeth are actual spells used by witches in Shakespeare’s day. There’s a legend that a coven of witches were so enraged that Shakespeare had stolen their spells, they cursed the play for all time. If you’ve ever been to see Macbeth, you’ll know the witches can be terrifying when they first appear out of the mist, and the words they speak are genuinely scary. It’s easy to see how this superstition grew up around the play in those days, and how it’s stuck.

My hero, Léon, certainly doesn’t believe in superstition. Léon‘s mother was Italian, and he uses a phrase that sums up his feelings about superstition exactly:

‘Do you know how we say “break a leg” in Italian?’ I shook my head, and he told me, ‘In bocca al lupo. It means “In the mouth of the wolf.” And if ever someone wishes you good luck in this way, you must never say “thank you,” because that is guaranteed to bring you bad luck. You must answer only crepi il lupo. It means “to hell with the wolf.”’

“To hell with the wolf” – I love that expression! It’s perfect for Léon, because he’s seldom afraid of anything…except for Lizzie’s safety – which becomes clear as the story progresses :)

The saying “In the mouth of the wolf” comes from the fact that female wolves carry their young in their mouths to protect them. The person saying it is wishing someone safe-keeping. It’s a lovely expression!

There is lots more mystery, skulduggery, superstition and double-dealing in A Year of Light and Shadows. The book is on special offer from today until 10th October 2017, to celebrate this season of spells, and is 99p/99c on Amazon Kindle and also available in print.

A Year of Light and Shadows contains three romantic mysteries that take place over a year in the life of Lizzie Smith and Léon Bressac. 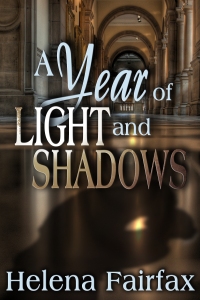 Book One: Palace of Deception When a Mediterranean Princess goes missing, Lizzie Smith takes on the acting job of her life. Alone and surrounded by intrigue in the Royal Palace, she relies on her quiet bodyguard, Léon. But who is he really protecting? Lizzie…or the Princess?

Book Two: The Scottish Diamond Home in Scotland, Lizzie begins rehearsals for Macbeth and finds danger stalking her through the streets of Edinburgh. She turns to her former bodyguard, Léon, for help…and discovers a secret he’d do anything not to reveal

Epilogue: A Question by Torchlight (A Short Story) The approach of Hogmanay in Edinburgh means a new year and new resolutions. Lizzie and Léon have put their year of danger behind them. But something is still troubling Léon, and Lizzie fears the worst…

I hope you enjoy Léon and Lizzie’s year-long adventures!

I love hearing about other people’s superstitions. If you have any rituals to ward off bad luck, I’d love to hear them!

8 thoughts on “Witches, Macbeth, superstition and mystery in A Year of Light and Shadows”