I have to confess this month hasn’t been a good writing month for me. I’ve started a new novel and I’m about 30,000 words in. A few agents have seen it already, and their comments have all been along the lines of ‘stick with it’, ‘well written’, and one actually said, ‘the opening is brilliant’. So what am I doing with my book now? For some reason I’ve become massively anxious about it. The manuscript is lurking in a folder on my laptop, unopened. All sorts of thoughts are going through my head. OK, the opening is good, but the rest will be rubbish, so why bother? What if I spend all this time writing it, and no one else likes it? What if I can’t get to the end of it? What if…???

Once I’ve talked myself into this situation, I find it very hard to get back out again. It’s so much easier to find any other job that needs doing rather than sit down and write, and I go to bed thinking, it’s OK, I’ll do it tomorrow… Before I know it, a week has gone by without a single word being typed onto the page.

How to be brave and persevere with writing

Funnily enough, when I wrote my first book I didn’t suffer from this angst. Writing was exciting and I just wanted to get to the end of the story. Now, having written a few books and edited several more, I understand just how little I knew about the art of writing a good book when I first started out. After receiving some advice from an editor and from an established author, I rewrote that first book several times. I had been so bent on getting the story told, I hadn’t paid enough attention to the characterisation, for example. My characters were two-dimensional and all motivation for their actions was missing. I had to give them a background in order to bring them alive. There were a few technical things wrong with the writing, too – the point of view was chopping and changing so much, it would make a reader dizzy! I went right back into the story and had a good think about how to change it, puzzling over rewriting each scene and each piece of dialogue so that my changes worked for the better. It was a struggle, but I enjoyed it. I had an enormous sense of satisfaction at the end, as though I’d completed a difficult crossword puzzle. And the book was SO much better!

Now I welcome advice on a first draft and I enjoy rewriting. I know there are some authors who don’t enjoy this part of the process, but I love to work on a manuscript and try and make it the best it can be.

Here are some of the sorts of things I’ve had to rewrite in other books:

I sent a draft of my last full-length novel, Felicity at the Cross Hotel, to an agent, and got this 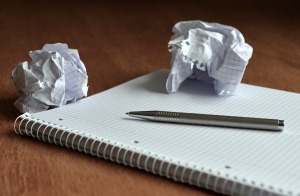 encouraging reply: ‘There is SO much that is wonderful here (Fliss, the setting, the idea!!)’

I was really excited by this, as you can imagine, BUT – and there is always a ‘but’! – the agent wanted a rewrite. There was a minor part of the plot she didn’t like, which was easily fixed. Next, there was the thorny issue of ‘show, don’t tell’. I once wrote a blog post with some real examples of ‘showing, not telling’, showcasing where it’s been done very well by other writers. (You can read the post here.) It’s a bit harder to spot where you’ve gone wrong in your own writing. This agent had me reading through my manuscript again, literally highlighting every instance of where I’m ‘telling’ the reader something. Then I went back and rewrote most (not all) of these scenes in order make the writing come alive.

Another point the agent made was that I’d told the story mainly from the heroine’s POV. She thought the hero was a strong character with quite a story to tell, and that it would be better to show more of his thoughts. I loved my hero by this stage, and I saw immediately what she meant. It took me quite a while, but I completely rewrote the book so that the reader now sees half the story from Patrick’s point of view. It made the book a much more interesting read and increased the romantic tension dramatically.

(And if you’d like to check out how my rewrites for this book worked out, Felicity at the Cross Hotel is a discounted Kindle book at the moment and only 99p/99c on Amazon US and Amazon UK until the end of August :) )

Besides enjoying the rewriting process, I also enjoy my work as an editor, particularly developmental editing. I know from experience how daunting it can be if you’re faced with a rewrite, and so I love it when one of my writers listens to one of my suggestions, reworks the manuscript, and sends it back all fresh and new. That gives me as much satisfaction as if it had been one of my own stories!

And so this brings me back to my present manuscript. There is nothing I can do with it at the moment, and I can’t do anything with it because it’s not finished. I can’t rewrite it and make it better, because it only consists of a handful of chapters and an idea. Putting this post together has actually been a boost and given me the confidence to pick up where I left off. What I need to do is stop feeling anxious about my writing and remember all the other poor first drafts I worked on. A poor first draft is nothing to be afraid of. Writing is rewriting!

What do you do when you’re stuck on something – be it writing or anything else you have a block on? How do you get round it?

And if you’re a writer, do you enjoy the rewriting process? Or do you love getting the first draft down?

If you have any comments at all, I’d love to hear from you!

14 thoughts on “Writing is rewriting: how to be brave and persevere”