My visitor today and I have one thing in common.  We both have a mixed breed rescue dog.  Apart from that, I’m so excited and interested to meet Angela Kay Austin, as she’s led a fascinating life, which all seems wonderfully glamorous to me as I sit here in the back yard of my terraced house in the north of England.

Angela plays various instruments and had small extra roles in TV shows before starting a career in radio and TV production.  She also spent many years in marketing and promotions, but writing is her first love.  Her first published work stayed on her publisher’s bestseller list for ten weeks.  Her second release hit the bestseller list at All Romance eBooks.

Where do you live, Angela? Memphis, TN, not far from the Mississippi River.

That sounds amazing.  I’d love to go to Memphis!

Where is your favourite place in the world?  There’s so much of the world for me to see.  But, from what I’ve seen so far.  Rome.  I loved everything about it.  Food. People. So much about it reminded me of New York , but not.  And the Vatican was one of the most beautiful places I’ve ever seen.

You’re right.  I’d never thought of it before, but Rome really is like New York – in an Italian sort of a way!

Being a writer is a great job.  What’s the worst job you’ve ever had?  I owned my own cleaning company for many years.  I developed a whole new respect for anyone who provides a service to anyone.  You’re an invisible army.  And, sometimes, when people see you, they look right through you.  People can be incredibly dismissive and mean.  And let’s not talk about really really nasty J

I’ve done that sort of work, too, Angela, and I feel for you.  It’s unbelievable how some people behave.

What book do you wish you’d written? “The Bluest Eye” It felt so familiar.  It opened up discussion about a part of the African-American experience that many people may not have been so aware of.

I haven’t heard of that book, but it’s going straigh on my TBR list.

What’s your favourite song?  That probably depends on my mood.  But, right now, one of my favourite songs on my iPod is “I Was Here” by Beyonce.

Great choice!  If you could meet anyone in the world, dead or alive, who would it be and what would you say to them?  Touch one.  There are so many.  But, I think I would like to meet some of the authors and poets from era of The Harlem Renaissance.  It would be great to meet someone like Langston Hughes.  I can’t imagine what it must’ve been like to be a part of a movement like The Harlem Renaissance.

I’m learning a lot from this interview!  What’s your happiest childhood memory? Pick any Christmas.  I loved the holidays as a child, maybe that’s why I still love them as an adult.  We don’t get much snow in Memphis, but you still have the change of seasons.  Add that to family, food, and gifts, and it’s just awesome!

If you had to marry a fictional character, from film, television, or books, who would it be? I’m in love with Bones from Jeaniene Frost’s Night Huntress Series.

Another book I haven’t read.  My TBR list is getting longer :)

What’s the most important lesson life has taught you? Not to give up.  Things don’t happen overnight.  If there is anything you really want, you have to work hard for it.  Giving up isn’t an option. 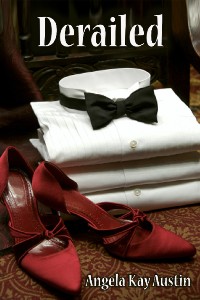 My latest book is “Derailed.” It’s the second instalment in my tribute to military servicemen and their families.  I am a part of a military family, and their dedication and commitment has always amazed me.  “Derailed” is my imagining of what happens to a single woman veteran when she returns home from serving.

Here is the blurb:

When you’re given away by the people who are supposed to love you forever, it makes it hard to believe love and family really exist.

JoAn Fentress thought the military would take care of her in the way her family never did, but that didn’t happen.  Homeless on the streets of Memphis, TN, she walked through the only open door she could find, and it changed her life.

Jeremy Hooks needed only to smile, and the world gave him whatever he asked of it.  Eventually, people stop partying, right…at least when they’re threatened.  He has one more chance to prove himself before he loses everything.

You can find Derailed here on Amazon.

Angela, thanks so much for coming all the way from Memphis.  (Are people always quoting songs at you?)  Thanks for your thoughtful answers, and Derailed sounds an equally thoughtful and intriguing read.  Thanks for telling us all about it!

If you have any questions for Angela, or any comments at all, please let us know.  We always love to hear from you!