Today I have author M.S. Spencer visiting, and she has arrived to torrential rain verging on sleet.  I’ve been walking the dog, and there are great muddy patches on the kitchen floor, where my raincoat is dripping forlornly from a hook. 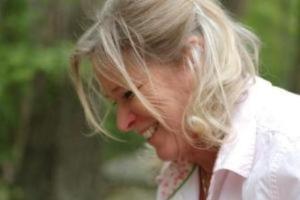 Thanks for coming to frozen Yorkshire, Meredith!

Thanks for having me, Helena. I hope your readers enjoy the interview.

Where do you live, Meredith?  The Gulf Coast of Florida

How I’d love to be there right now!

Where is your favourite place in the world?   I hate these questions because I can’t possibly make up my mind. And besides,  I haven’t been to every spot on earth. Of the places I’ve been: Paris, or Istanbul.  Kelly’s Cove in Maine. Iquitos, Peru. Myakka River State Park. Longboat Key beach. I’ll stop now.

Seems you’ve been to a lot of spots on the earth!

Being a writer is a great job.  What’s the worst job you’ve ever had?  Hoo boy. That would be my one foray into the retail world. I was studying Arabic at Harvard for the summer and needed money. Usually I made it typing other people’s papers or working as a research assistant, but nothing was available this year so I decided to try something different. I got a job at the 1970s equivalent of a dollar store (or maybe Woolworth’s). I thought it would be cool to be able to walk through a door marked “Staff Only” and get a 20% discount on anything in the store. I didn’t count on the secret door being to the most disgusting bathroom I’ve ever seen, nor that there would nothing—and I mean nothing—in the store that I wanted. The management wasn’t too pleased with me either. Since I dress up good and behave well they put me in the front at the cash register. By the end of my first day they gently removed me to the storeroom. Turns out I can’t make change for the life of me. That’s of course why I turned to fiction.

What’s your favourite song?  Oh there are lots. I love Rascall Flatts’ God Bless the Broken Road. My mostest favorite is Nessun Dorma from Puccini’s opera Turandot, sung of course by Pavarotti.

If you could meet anyone in the world, dead or alive, who would it be and what would you say to them? Samuel Johnson—a hero of mine. I wouldn’t say anything to him; I’d just listen.

What’s your happiest childhood memory?  Perhaps my first Christmas in France when I was ten. Our trunks hadn’t arrived and we had to make our ornaments out of construction paper and popcorn. We had no lights so we put real candles on the tree. Somehow it was much more magical than any store-bought plastic decorations. I was so excited I got a stomach ache and had to sit with a milk jug filled with hot water on my lap.

If you had to marry a fictional character, from film, television, or books, who would it be? The Librarian (from the movie hero played by Noah Wylie). Like me, he is always looking to learn new things and stores up all this seemingly unimportant information until it’s needed. Also, he’s funny and humble.

What’s the most important lesson life has taught you?  To enjoy people. To appreciate the diversity of life—every person is worth listening to and not only because you can learn so much by listening. You can give joy to people simply by looking them in the eye with a smile. 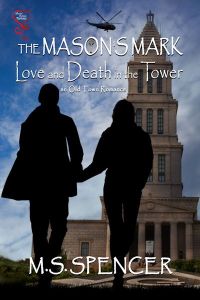 Most of my new novel The Mason’s Mark is set at the George Washington National Masonic Memorial. Three hundred and thirty-three feet tall, it sits atop Shuter’s Hill overlooking the colonial city of Alexandria, Virginia. The building has three sections—the ground level, the main floor, and the tower. The tower holds six progressively smaller rooms, each of which has a special theme and sponsor. For example, the ninth level is sponsored by the Tall Cedars of Lebanon, an adjunct group of the Masons, and depicts how King Solomon’s throne room would look. The fourth floor is different. It contains a museum dedicated to George Washington. Washington served as the Charter (first) Master of the Alexandria lodge, and many of his letters and memorabilia are housed here, including the Washington family Bible. Since our heroine and hero meet in the museum, it follows that the Mason’s Mark would involve long lost papers, distant family scandals, and academic intrigue concerning our first President. Delicious mystery and even more delicious romance ensue.

In both the best and worst first day at work ever,  docent Claire Wilding meets the man of her dreams, but her carefully rehearsed guided tour of the George Washington National Masonic Memorial falls apart when she discovers a dead body. Together with Detective Ernest Angle, she’s drawn into a dark world of black ops and Italian renegade masons. Also cloaked in mystery is her new love Gideon Bliss.  A George Washington expert, he haunts the Memorial, his manner evasive. What is his secret? Claire fears she’ll fall in love with him only to learn he’s a thief or even a murderer.

Juggling two eccentric mothers, an inquisitive sister, and an increasingly smitten Ernest, Claire must find answers to a complex web of intrigue, including which black ops agent to trust,  whether our first president strayed, and if she and Gideon will ever be together.

The Mason’s Mark: Love and Death in the Tower (an Old Town Romance)

I’d love to hear from your readers.

Thanks for coming all the way from the sunshine coast to sunless Yorkshire, Meredith!  It’s been fascinating to find out about the George Washington memorial (I’ve only seen it on Homeland :) )  Have a safe trip home!

If you have any questions or comments for Meredith, please let us know – we’d love to hear from you!