Today US author E. Ayers is here with a Christmas recipe she told me she thought “unusual” when she first read it. I had to laugh when I read what the recipe was. It’s not odd to us in the north of England – we eat pork pies a LOT. Available in every butcher’s and supermarket, they are a staple on Boxing Day in my house. I’ve never tried E. Ayers’ recipe, though, and I was intrigued to read this Canadian version, which looks absolutely delicious – and I will definitely be trying! Her husband and mine share something in common – they both love a pork pie!

Thanks for coming by and sharing, E. Ayers!

Thanks so much for inviting me to be here! There are two recipes that spell Christmas in my house. One is a cookie recipe that has been handed down through several generations. But the other is a rather unusual meat pie. I’d like to share that pie recipe with your readers and give you a little history behind it.

My husband and I were from very different backgrounds so the whole idea of celebrating Christmas became a huge jumble of conflicting things. We had a serious discussion about what was important. He came from a super-huge French Canadian family (super huge to me!) where Christmas dinner was an outrageous assortment of foods.

No way! There were only two of us. Pick something that you absolutely love that means Christmas to you, and I’ll make it. So he did.

Huh? What the heck is that? By the time he tried to explain it, I was completely confused. Say pie to me and I’m thinking fruit pies. So I asked his mom who promptly supplied me with the recipe and invited me to watch her make it.

We’d only been married a few weeks and I barely knew how to scramble an egg. I took the recipe to my mom and begged for help. She showed me how to cheat my way through it. Instead of grinding hot pork like his mom, I bought the pork ground and cooked it! Guess what? The pies tasted the same! I never told my mother-in-law I cheated.

I promise, it’s not difficult. I taught my one granddaughter to make it when she was eight. I’ll admit the crust had a few “problems”, but she was proud of herself! Every year tourtiere was there for our Christmas Eve dinner and for breakfast the next morning. It made Christmas morning a breeze! I’d start the coffee, put the pie in the oven to warm, and watch the children open their presents! By the time we got around to breakfast, it was hot and ready for us.

I will admit it is a bit different. I’ve made tons of them over the years and shared with friends. I’ve had a few friends who found it to be a little strange, but most all my friends begged for me to make one for them or begged for the recipe.

It’s delicious when served with an apple and pear compote. Just cut the apples and pears up into small bite-sized pieces. Put a tiny dollop of butter in a pan and allow it to melt. Toss the fruit into the pan, add a dash of water, and little sprinkle of sugar if needed (if the apples and pears are really sweet do not add sugar), and then heat on the stove in a covered pan until the fruit is soft. (If you overcook it, you’ll have homemade applesauce! Go ahead and ask me know I know that.) Allow it to sit in the warm pan so it’s not runny. Serve warm.

1 pound of ground pork (British: 450gsm pork mince) I ask the butcher to grind very lean pork for me. It costs a few cents more, but it’s worth it.

2 medium boiled and peeled potatoes (Cut up fine. You want some texture but no large chunks.)

One fat slice of mild onion (or cheat with powdered onion and skip sautéing in butter.)

a dash of salt and little butter

pork gravy (you can cheat and use packaged gravy)

Cut up the onion into very fine pieces and sauté in butter. Add ground pork and stir until cooked. Turn stove off. Drain any excess fat. Stir in seasonings. Gently add the potatoes. You will need about a cup of gravy. I save my unsalted potato water and mix that with the gravy packet. Add that gravy to the meat and potato mixture and lightly stir.

(I swear they are so easy to make and taste delicious. You’ll never use store bought again.)

2 cups of all purpose flour (Brits – use plain flour. This will equal about 8oz/225gsm)

Measure flour and salt into a bowl. Cut in shortening. Take two knives and cut until shortening seems to vanish into the flour and it all becomes grainy. Sprinkle in water, mixing until the dough begins to form a ball and pulls from the sides of the bowl. Gather into a ball with your hands and cut the ball in half. Cover the one unused half with a damp paper towel.

Don’t worry about having a dough board, etc. Make certain your countertop is extra clean. Sprinkle it with flour. Be generous. If you don’t have a rolling pin, substitute with something that will roll such as a smooth glass jar. Sprinkle a little flour on the dough ball and don’t be afraid to sprinkle more flour as you go. Roll the half ball into something about the size of your hand. Pick it up, flip it over, and roll it using pie slice strokes to create a round shape. (Think of a clock and roll from the center to the 12, then from the center to the 2, from the center to the 4, etc.) The flattened dough needs to be about two inches larger than the rim of the pie plate. Don’t worry about ragged edges.

When I taught my children, I often used waxed paper under the piecrust as they rolled. I’d let them roll it out part of the way on the counter, and then when I flipped it over, I put it on waxed paper that had been floured. The waxed paper tends to slip around so I’d glue it down with a smear of dough on the countertop. I’d let them mark the circle on the waxed paper with a pen ahead of time so they knew how far the dough had to stretch. (Put the marked side down on the counter.) Then it’s easy to pick the crust up, waxed paper and all, and flip it over into the pie plate. Gently peel the waxed paper off and push the crust into place. Fix cracks, etc, with a wet finger as you push the dough back together. (Practice will teach you not to have cracks, but if you get them, it won’t change the taste.) Trim the crust slightly beyond the edge of the plate.

Fill pie with meat filling. Do not exceed the height of the pie plate. And don’t try to pack it tight. (Any excess filling can be heated in the microwave and eaten on toast. Or if you have enough you can make another pie or freeze it.)

Make a top crust by rolling out the other half. Lay it gently on the pie. With luck this one will look much better. (The bottom crust was practice, right?)

If you have clean pastry shears you can cut the dough, if not, use a sharp knife and remove all but an extra inch. Tuck that top layer under the bottom layer on the rim and flute it with your fingers. Or cut both crusts to the edge of the pie plate and run a damped finger between the two so that they stick together. Use the handle of a spoon and press them together or use the tines of a fork. You can make pretty fluted patterns doing it.

Cover the edges of the plate with a foil sleeve to protect the edges from getting too brown. This pie needs to be vented so that the steam escapes. The quick way is to put 2-3 1 inch knife slices in the center. Bake the pie at 425 degrees Fahrenheit (210 deg C / gas mark 6) until it begins to brown.

Remove the pie, allow it to cool and refrigerate. Then I reheat it without the foil on the edges. Or remove foil to allow the edges to brown and serve hot. Make some extra gravy to pour over it when it’s served. (I’ve also seen his family eat it with ketchup on it.) (Helena: my husband has brown sauce)

I decorate the crust and this has become a tradition in my house. It doesn’t take much skill and it’s fun! It only takes a sharp knife and toothpicks. Over the years trees have become elaborate things with presents under them and Christmas balls hang from pine branches. Some years the piecrusts haven’t looked that great especially when my girls were learning. And lately it’s been the same with the grandchildren making them, but they taste wonderful. 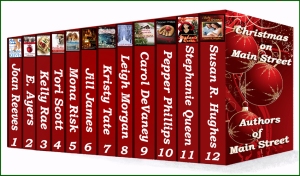 E. Ayers is an Amazon best-selling author in Western Romance and a proud member of the Authors of Main Street. When she least expected it, she found her prince charming and married him five weeks later. She uses that heart-warming passion as a basis for all her books, because she believes everyone needs someone to love.

Visit her blog and read her holiday short story, The Kissing Ball, for free.

11th November, and giving away a FREE copy of Decorating on Main Street.

I can’t wait for release of your collection, E. Ayers. The Authors of Main Street are guaranteed to put together a great read. Thanks so much for coming by with your French Canadian recipe. It’s been really interesting to find how the north of England and Canada share the same dish.

E. Ayers is one of the contributors to our dessert recipe book Bake, Love, Write, where you can find lots more delicious recipes to try out over the holidays (Amazon US

Do you like meat pies? Do you have a traditional Christmas recipe? If you’ve enjoyed E.Ayers’ post, or have any questions or comments at all, please get in touch – we’d love to hear from you!

43 thoughts on “A recipe for Tourtière and a fabulous book collection – all part of Christmas on Main Street!”