Today it’s a real pleasure to welcome author Mark Casigh. Mark writes hot romances – and when I say hot, I mean hot! So hot I’ve had to make myself a bowl of ice cold sorbet and eat it sitting in front of a fan.

I hope you’ll read through Mark’s engaging and charming interview, and – if steamy romances aren’t your thing – then feel free to avert your gaze when we get to the bottom of the page. (If they are your thing, though, you’re in for a treat!)

Where do you live, Mark? I live in south eastern Michigan very near Detroit. And yes, it looks very much like you imagine it does. An entire city of squalor. It was once a city that housed nearly two million people, that now holds probably under 600,000. That’s right; It’s more than 2/3rd empty.

It’s an absolute shame that this has happened to Detroit, Mark. We have a few coal-mining and industrial towns that have declined here in northern England, but nothing on this scale.

Where is your favourite place in the world? I’m really kind of leaning towards Door County, Wisconsin on Lake Michigan. It’s just so serene and tranquil. I’m sure there are more picturesque, or more stunning, breath taking locations out there, I’ve seen a great many of them, but Door County holds something special for my wife & I both.

Being a writer is a great job.  What’s the worst job you’ve ever had? When I was in High School in Waukegan, Illinois, I was a Salad boy at a seafood restaurant on the lake. I didn’t care for that job, at all! Later, I managed to get a job at Six Flags amusement park at Gurnee, Illinois as a Patio Attendant. That job sucked plenty, but it sucked less.

I must say being a writer does sound a lot better than either of those!

What book do you wish you’d written? That’s easy, Henry V. Yes, I’m still angry that Bill Shakespeare beat me to it! That is the quintessential book on leadership. And being a retired Paratrooper, Leadership has always been a very important part of my business persona, or “game face.”

What a great choice. I’m going to see Henry V later in the year at my local cinema, performed by the Royal Shakespeare Company, in a nationwide live screening from the theatre in Stratford. I’ve never seen the play performed before and I’m really excited about it!

What’s your favourite song? I don’t know that I can narrow it down to just one. I’m very musically confused, meaning that I’m torn between Jazz and good ol’ fashioned American Rock & Roll

I’m rather fond of Bob Segar. Why? Probably because, just like John Cougar Melenkamp’s “Cherry Bomb,” the music just sort of does something to you. It takes me back to a happier time and the songs resonate with me, during those high school years, when drive in theatres were still alive and common, and girls were still new and little more than a collection of question marks.

By the way, women are still very much a mystery, just not quite as big of one.

It’s strange how the music you loved when you were young resonates so much still when you’re older. Maybe we felt everything with more intensity in those days.

If you could meet anyone in the world, dead or alive, who would it be and what would you say to them? Mark Twain: I believe Mark Twain was the American Shakespeare, despite those young and ignorant college “elite,” or “progressive intellectuals,” as they may refer to themselves, who think that these authors are examples of oxcarts in a nuclear age. These are authors whose books will always be classics. Not because of the problems the characters must face and overcome, but because they both wrote about the only thing that remains consistent throughout the ages: Human Nature.

Yes, that’s right Bill!!! I compared you to Mark Twain! Take that!

What would I say??? I believe that I would ask: How did you sharpen and hone your genius? Can you do anything to cultivate your creativity?

I think Bill would be honoured to be compared to Mark Twain!

You paint a wonderful picture. I can feel the frost in the air.

If you had to marry a fictional character, from film, television, or books, who would it be? Ever since I first read “Tom Sawyer,” and “the Adventures of Huckleberry Finn,” I’ve always had a slight crush on Becky Thatcher (not be confused with Margaret), and while it requires me going back to my 13 year old self (NOTE TO SELF: You cannot counter eating 10 teaspoons of salt, by eating 10 teaspoons of pepper!), that would be my first choice.

Of course, Becky Thatcher is also only 13 or 14 years old, and will be in perpetuity. So I guess I have the advantage of wisdom in some regard, since she will deal with the issues that I have had as an adult.

I love your choice of Becky Thatcher. What a wonderful teenage crush!

What’s the most important lesson life has taught you? Once again, I’m going to go back to Shakespeare: To thyne own self, be true.

You can find most of my books at MuseItHot Publishing.

However, I have one Novella out now that will also be available in print, for those who go through Amazon. This novella is Awakenings: Cozumel, Mexico. This one was published through my California Publisher, Damnation Books, and you can find it here.

Otherwise, readers will always be able to find my books at my webpage

I have a few launching this year, all of them Christmas Erotica, which lately I seem to be doing almost exclusively. I guess that’s primarily because a novella is so short and easy for me to knock out.

I have two already available at my publisher’s webpage, these are: Auld Lang Syne and The Penitent.

Every year, my Publisher, Muse It Up Publishing and Muse It HOT Publishing of Montreal, Quebec, Canada, puts out a Call for Submissions for Christmas Erotica, which I submit something every year. Generally speaking, these calls have a word-count ceiling of around 12,000 words. That, I can write in about two easy days of writing, provided I have a good story in mind.

This year I have one title, My Secret Santa, due to launch and I also have another story titled Under the Mistletoe, 1945.

Auld Lang Syne Over Christmas the previous year I had Auld Lang Syne launch. This is another tale of Christmas Erotica, and has a tie into those High School years, however it’s really about a love long lost and unfulfilled.

Here is the blurb: A lonely woman approaching middle age is a retired Public School Teacher and now works as a Librarian in her lifelong home of Brooklyn, when one Christmas, in walks what could’ve been, should’ve been, probably was the love of her life, who just dropped off the face of the earth in their senior year, that she had known her whole life, that was the one boy who treated her differently, who treated her with genuine affection, who treated her with respect.

Is it too late for their unsatisfied love? Was it ever real? Or was it all in her mind? Where has he been all these years? Why does he seem to not recognize her? Why didn’t he call her? Where has he been? Is he married now? 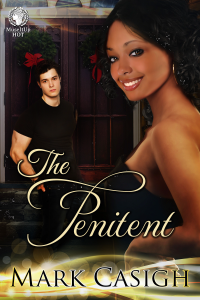 The Penitent All eighteen-year-old Mark wants is to be able to spend some alone time with Felicia. They aren’t exactly girlfriend/boyfriend—their relationship isn’t exactly accepted everywhere since he’s white and she’s black. Mark doesn’t care, and neither does she, and to his relief, when he comes over for Christmas, her parents don’t either.

But with so many relatives over, finding time for each other isn’t exactly easy, but they will find a way. Growing up a Catholic means that Mark knows premarital sex is wrong, leaving him to wonder if absolution is what he really wants and what exactly love is.

My Secret Santa  is a story about a woman from Detroit who had moved away long ago, and now comes home for the Christmas, and now finds that she has a very secret, mysterious, amazing lover. Who is it???

Now this is set back in Detroit during the current day. For those who love, no. I mean REALLY LOVE, Hot Steamy Erotica, this one should fit the bill nicely!

Under the Mistletoe, 1945  has a bit of a back story; My Grandmother, Marian had two brothers who both joined the US Navy on 12/26/1939, on the condition that they be assigned to the same ship and serve together. And the Navy honoured the contract and assigned both to the USS California, a Battleship. Which is all fine and good, until December 7, 1941, when the California was parked on Battleship row, come Pearl Harbour.

The California won four Congressional Medals of Honor that day, the most ever awarded to a single vessel for a single engagement with the enemy (no, none of my family received one), but both survived the attack and gave the Navy an opportunity to reconsider the wisdom of allowing them to serve together. Too bad the Sullivan’s didn’t talk to them.

Anyways, one was reassigned to the USS Essex, an aircraft carrier, while the other was assigned to the USS Astoria, a Destroyer. Ken, who went to the Astoria has been listed as “Missing in Action: Presumed Dead,” since August 8, 1942.

Under the Mistletoe, 1945 was my way of giving Ken a life, a love and a romance that he did not get a chance to have in reality. It’s starts with his return from the grave, and yes! It’s pretty steamy!!! Strong adult content warning.

Unfortunately, I have no book covers yet for these last two. But I surely hope that I can come back and visit again, hopefully when I do have some new covers, before Christmas! I want to thank you Helena for inviting me!!! It’s been a thrill to be on your page! I seriously mean it!

Thanks so much for coming all the way across the pond from Michigan, Mark. It’s been an absolute pleasure getting to know you. Wishing you all the best with your releases (and I wish I had your work rate!) It would be lovely to have you back at Christmas. I look forward to it!

If you’ve enjoyed Mark’s interview, or have any questions or comments at all, please let us know. We’d love to hear from you!