Another month – and another Round Robin already! This month the topic is “Confrontation creates powerful drama. Use one scene you’ve written (published or not) that shows confrontation between characters with a brief explanation.”

My romantic suspense novella The Scottish Diamond is on a free promotion this weekend (until 24th May 2016) and so I thought it would be perfect to choose a scene from this book.

This scene happens near the end of the story (but it doesn’t give away any of the twists and turns, so don’t worry about spoilers). The Scottish heroine, Lizzie, has a boyfriend called Léon who comes from the European country of Montverrier. Lizzie gradually comes to realise that the men from Léon’s country are not to be trusted…and she begins to wonder how far can she trust him, too. The theme of the novel is “Fair is foul and foul is fair,” and trust and deception play a big part.

In this scene, the conflict is understated but hopefully the reader can tell even from this snippet that the man in the overcoat and the man in the shirt-sleeves are bad guys. As for Léon – Lizzie still has to make her mind up about him.

‘What sort of trick is this?’ I asked.

Léon’s hand was at my elbow, his face grim. ‘Come. We’ve played our part, and you need to get in from the cold. Let’s talk at home.’

The man in the overcoat placed the diamond back in its box and slipped it into his pocket. The group began to make their way on silent feet, back to their van.

‘Come with us, Léon,’ said the one in shirt-sleeves, hanging back. ‘There is room for you and your bike.’ He indicated the open doors of the van and cast me a sympathetic look. ‘And your girlfriend. She looks cold.’

I had no intention of getting in their van with them. ‘I’m warm enough – ’ I began.

At the same time, Léon said coldly, ‘I’ll take care of her.’

The Montverrian gave a slow, soft smile. With a hint of reluctant admiration, he said, ‘You go your own way, as always, Léon.’ He turned to me, his head slightly tilted, his smile turning to one of amusement. ‘And my coat?’

I’d forgotten the coat. I began to take it off – I’d sooner have frozen to death on the road than get in that van with them – but Léon put his arm round my shoulders, and pulled me to him.

Shirt-sleeves flicked a glance between us before raising his hands good-naturedly. ‘Keep the coat,’ he told me. His smile became one of regret. ‘Goodbye, Léon. I’m sorry you won’t join us.’

Léon said absolutely nothing. He held the other man’s gaze, his eyes filled with an arctic chill such as I’d never witnessed in him before. I shivered inside my heavy coat.

The Montverrian raised his hands again, taking a few steps backwards. ‘But no hard feelings,’ he said, still with his smile. ‘I hope our paths will cross again.’ He gave me a pleasant nod. ‘Au revoir, Lizzie.’ And then he climbed into the van. One of the group slid the door shut, the engine roared into life, and we watched the van disappear, until the yellow glow from its headlights had completely vanished in the distance, and I was standing in the dark by the edge of an empty road, alone with a man called Léon Solara. My lover, and a stranger. 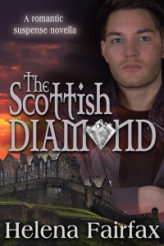 I hope my extract has whetted your appetite to find out more. Conflict doesn’t always have to be about raised voices – there can be a subtle conflict of wills, as in the scene above.

If you’d like to read the rest of The Scottish Diamond, please pick up a free Kindle copy this weekend.

And I’m looking forward to reading the extracts from the other authors in our Round Robin. Please check them out in the links below!

21 thoughts on “How conflict can be understated, plus a #FREE romance novella”